When a good friend of mine found out that I was a fan of Game of Thrones, she turned me on to Outlander after it had aired last year. Although comparisons have been drawn to Game of Thrones, these two series are not entirely similar (admittedly, both of the book series were difficult to market, were “word of mouth” books and took a good while before being translated to screen). But Game of Thrones is epic high fantasy that takes place in a world nothing like our own and is dependent on magic, dragons and family sagas. Whereas Outlander takes place in a historically accurate Scotland and is more historical fiction/romance with a twinge of science fiction thrown in the beginning.

Our story opens with the heroine Claire Randall, a former British Army nurse seeking to reconnect with her husband Frank after a WWII-induced separation. Their story begins on their second honeymoon in Inverness, Scotland, where Frank indulges his passion in genealogy (which you can do with the Library’s resources), while Claire focuses her energy on botany. After witnessing a pagan ritual at an ancient stone circle with her husband, Claire ventures out alone to gather some specimens. She’s drawn to a standing stone and, as far as her husband in 1945 is concerned, vanishes without a trace. This serves as the jumping-off point for her adventure as she struggles to grasp what’s going on around her, when she is and where she is.

Though she quickly realizes she’s still in Scotland, she can’t quite figure out how she landed on a cinema set for a costume drama. However, she soon gathers this is no set when she notices that the actors are firing live ammunition. Through a stroke of bad luck, she runs into Captain “Black Jack” Randall and is almost raped, but is saved by Dougal McKenzie’s band of Scots and taken hostage. It is at this point that she discovers she has fallen through time to 18th century war-torn Scotland, where being an Englishwoman isn’t always a great thing to be. Her captors lead her to Castle Leoch, the heart of the McKenzie Clan. She is suspected of being a Sassenach spy and tasked with the unpaid job of healer, while they try to figure her out. If you expected a damsel-in-distress story, this isn’t it. Claire is a capable, clever (and thanks to her husband Frank, knows her history), complicated, independent and stubborn modern-day woman (for 1945 at least).

Devoted fans of the Outlander series who have been waiting (… and waiting … and waiting) for these novels to be successfully translated to the small screen, have had their patience rewarded tenfold with the Starz series. There is demonstrated effort to keep the series as faithful to the books as possible.  Created by Battlestar Galactica show runner Ronald D. Moore, this series enlisted author Diana Gabaldon as a consultant, thereby assuaging any anxieties that Gabaldon’s loyal fanbase may have had. If nothing else, watch for the great scenery, fantastic costumes and dedication to historical accuracy. Mr. Moore has an amazing team of costume designers, set decorators, writers, weapons and riding experts and Scottish Gaelic language coaches for the actors that would rival Game of Thrones any day (well, except for the dragons …).

If a bit of adventure, time-travel, history and romance are your thing, by all means check out the DVD sets (volume 1 and 2) today. In the meantime, take some time out to brush up on your history of the Jacobite Rebellion and Bonnie Prince Charlie. If you want to take it to a whole new level (and please do!), you can also learn a bit of Scottish Gaelic using the library’s resources. Season 2 of Outlander begins in April on Starz.

It’s summer. It’s hot. For whatever reason two of the things that I’m currently obsessed with are heat related. That’s right, you guessed it… the wildly under-rated TV show Burn Notice, and the Sci-Fi trailblazer and classic Dune.

Do these things really have anything to do with it being hot out? Well, you be the judge: Burn Notice takes place in Miami, Florida. Dune takes place on the water-barren sand planet formerly called Dune, known as Arrakis. Both hostile environments, to be sure (but there is way more water in, and around, Miami…and more Cuban food, too).

Of course Burn Notice is a TV show about a spy, and it doesn’t take itself too seriously. I mean, Bruce Campbell (yes, THAT Bruce Campbell, of Evil Dead fame) is in it. Right there you know it’s a winner.

The famous film adaptation of Dune is something I’ve yet to dig into, but I’m sure it’s worth it. I mean, it was directed by David Lynch and features a young Kyle MacLachlan, so armed with that information you know what you’re getting into. For now, I’m quite happy with Frank Herbert’s book.

So if you want to learn about a yogurt obsessed spy who really, really wants his job back, Burn Notice is right up your street. However, if the political machinations of a far-away sci-fi world is more your taste, check out Dune.

Check out either one (or, like me, both!) of these HOT sounding titles.

Eric (who is currently eating a lot of soy yogurt, or as his wife calls it…”spy food” while wondering if home-made stillsuits will make the scene at the next local handmade arts fest)

Tomorrow night marks the close of a brief, but wonderful era on television as Fringe ends its run (and a sizeable portion of my happiness) with a two-hour series finale. When I think about the show being over, I tear up a little which shows how much I care about it because I normally only cry when I stub my toe or I’m watching a sports movie.

My favorite fake people ever. Found at http://www.fringefiles.com.

When it premiered in 2008, it was immediately clear that it was my kind of show: X-Files-ish and J.J. Abrams-created. If you’ve never seen Fringe, I don’t think I can begin to explain it and if I did begin to explain it, I’d probably confuse you and myself. In Fringe, science and technology are such an integral part of the story. Alternative universes, time travel, and nanobots aren’t just plot devices to get the writers through an episode; they’re plot points.

You can’t passively watch Fringe; for the most part, it requires your attention. Even when paying attention, I didn’t always understand what was going on. Sometimes, it would take long discussions with friends for us to figure out what had developed on the show. There are a few things on the show that I chose not to pay attention to, like the glyphs. Before commercial breaks, a glyph appears on the screen. Depending on what it (shown below) is and where a dot is located by the glyph, the glyph stands for a different letter. These letters spell a word and that word is a theme for the episode. But, hey! You don’t need to know that to watch the show! It’s just an added bonus for people who can pay attention to lots of things; so people who aren’t me. 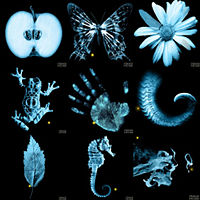 I have no idea what these mean and I still love the show!
Found at http://fringepedia.net/wiki/Glyphs.

Even with the science-heavy aspect of the show, Fringe is, at its heart, a story about a father’s love for his son. In my opinion, the characters are the best thing about the show. As interesting and captivating as it can be to watch people jump from universe to universe or to reanimate dead bodies, the thing that keeps me watching is the family that’s been created by the main characters. When the show started, Walter, Peter, Olivia, and Astrid were all separate people, living separate lives and now, they’re a family knit together by LSD, peanut butter and bacon sandwiches, and the Observers.

But tomorrow night is the end, there will be no more new episodes, and my face will be a sad one. A friend and I have decided to rewatch the show to catch things we missed the first time around so Walter, Peter, Olivia, Astrid, Broyles, Nina, Fauxlivia, Walternate, Lincoln, and Charlie will remain a part of my life. I’m thankful that the show was around for 100 episodes. If you haven’t seen Fringe yet, you should watch it. “Highly recommended” doesn’t even come close to how I feel about it and it will be missed.

-aisha, who will be curled up on her couch Friday night and not remotely ashamed to be crying

what is this i don’t even

Last month I replaced most of our worn and damaged TV series box sets – now the Main library has scads of new DVDs, including The Adventures of Brisco County, Jr., Desperate Housewives, Fingersmith (man, does that one circulate), M*A*S*H, Prime Suspect, The Sopranos, and the original* Upstairs Downstairs.

When I replace DVDs, I always inspect the old discs before I send them to their final resting places (final resting places can vary, you see – but that’s all boring and technical). Anyway, this is what I found inside the second season of Upstairs Downstairs.

what is this i don’t even

Someone, somewhere, at some time, put a sticker on disc F. A sticker that’s exactly the same as what’s beneath it (note: please don’t do this).

Obviously, I had to share my confusion with my coworkers – most of them sat very still for a few moments, blinking slowly in sad puzzlement before finally turning to me with a slightly pained expression in their eyes that begged, “Why? But why?” as if their very hearts would break if I could not unravel this mystery for them.

We have our theories, of course – though they involve library trade secrets, so I can’t share them with you here. You’ll have to work it out on your own (or you can just check out Fingersmith instead).