I started reading historical romance a little over two years ago because I was sick and tired of reading sad and depressing books that were highly touted in literary circles, The New York Times Book Review, and book clubs. I once derided the entire romance genre as frivolous until I actually read one.

I now only want happy endings, sparkling dialogue, and a passionate love story; even better: a book that can make me laugh and smile.

I thoroughly enjoy the witty works of Jane Austen, so historical romance is my favorite reading pleasure. I can always count on a lovely story and, with these three authors, laugh out loud humor. 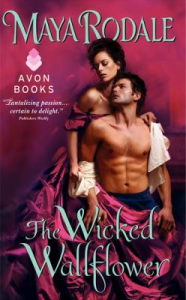 We don’t own all of this author’s delightful books except for her Writing Girls series, about Regency era working women who write for the scandal sheet, The London Weekly–which, incidentally, makes a recurring appearance as it reports on scandals in almost all her novels.

Isn’t this a great cover?! In this story, the first in the series, Lady Emma Avery is a wallflower whose name is falsely linked with the handsome and rich Duke of Ashbrooke in The London Weekly. They decide to keep their pretend engagement so that he might redeem his debauched reputation and find investors to fund his invention and she, in turn, can raise her social standing in society. Of course, things don’t work out as planned. This book is part of an amusing concurrent historical/contemporary series–the contemporary part being a series of novellas called Bad Boys—with a similar theme of a pretend engagement–Rodale calls it a “fauxmance”–on Facebook and other social media. Fun fact: the heroine is a librarian at the New York Public Library.

“’It can’t be any more torturous than a wallflower’s fourth season on the marriage mart.’” (p52)

“It was official: she’d had more callers in this one hour than in four seasons combined. Behold: the power of Ashbrooke.” (p26) 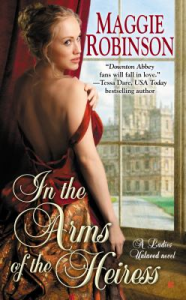 With her cheeky Courtesan Court series about the everyday lives of a group of mistresses on Jane Street to her London List series about a Regency-era scandal sheet of provocative personal ads spoofing today’s craigslist, to her most recent Edwardian-era series, Ladies Unlaced, which takes place around a slightly unorthodox employment agency, I can pretty much count on Maggie Robinson to always make me laugh.

A wacky, independent yet vulnerable heiress, Louisa Stratton hires Charles Cooper, a traumatized war veteran down on his luck, to pose as her fiancé on a visit home to her undeserving family. She hopes to display a veneer of successful independence with a loving, artistic husband while Charles just wants the cash.

“Louisa Stratton was a handful who would drive the average man to drink. Hemlock, if it was handy.” (p175)

”’If you were my wife, I’d rescue you. You could live just as you pleased—I wouldn’t interfere with whatever cork-brained scheme you dreamed up.’” (p240)

“Any husband she’d have would risk being henpecked until he resembled a dartboard.” (p289) 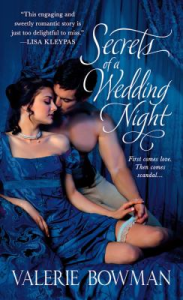 Bowman is a newcomer to historical romance and her lighthearted and charming Regency era Secret Brides series is wonderfully entertaining and funny. Each title represents the scandals in the books, written in pamphlets–think of today’s zines–and are the same titles as the books:

From Secrets of a Scandalous Marriage:

“Since coming in the back door, she was already warming up, and she hadn’t had a proper bath in over a fortnight. No doubt she smelled like a foot. A very dirty foot.” (p44)

From Secrets of a Runaway Bride:

“First of all, you should not have been eavesdropping. It’s unspeakably rude, and second, what would you know about a marital bed? You’re not married!” (p59)

-Maria, who is done with sad books forever

Note: This post is the third in a series highlighting historical romance novels I’ve greatly enjoyed.

Belle of the Ball or Wallflower?*

‘wallflower’
2. a. a person who from shyness or unpopularity remains on the sidelines of a social activity (as a dance) Merriam Webster dictionary

I was a wallflower. You know, one of those women who go unnoticed (deliberately or not) in a room for whatever silly reason. Perhaps she’s bookish, doesn’t like (or know) how to dance, or is simply shy.

The theme of the wallflower is a popular trope in fiction, especially in historical romance. And there are several unique twists to that trope. But, oh, how I love that moment when the wallflower shines and is appreciated for just who she is by the handsomest gentleman in the room. 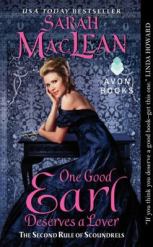 One Good Earl Deserves a Lover by Sarah MacLean

Lady Philippa (Pippa) Marbury is a bluestocking–”I’m odd” she  declares–from a well-heeled family who wants to learn more about exactly what happens on a wedding night before her actual wedding night in two weeks. She approaches her brother-in-law’s notoriously scandalous friend, Cross, an earl in hiding from his past to aid in her “scientific research experiment.” What follows is a battle of wills, witty dialogue, and an unforgettable heroine. Funny and poignant, I found myself rooting for Pippa’s happy ending all the way. This is the second in MacLean’s very entertaining and engaging Rules of Scoundrels series about four owners of a successful Regency England gambling hell. 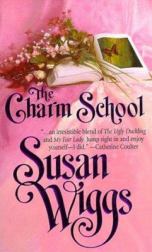 The Charm School by Susan Wiggs

Isadora (Dora) Peabody is a misfit, an ugly duckling overshadowed by her talented and attractive aristocratic Boston family. She longs to escape her life and herself, so she maneuvers her way into a high seas adventure much to the dismay of the arrogant Captain Ryan Calhoun, a man who prefers to run away from his problems rather than face them. Along the way, Dora’s charm and  power are revealed and she befriends everyone she meets, effectively coming out of her shell. Calhoun comes to realize and appreciate her strength of character as well as her courage in the face of hardship. Note: Wiggs has said that Dora is “modeled after yrs truly.” Book one in a series. 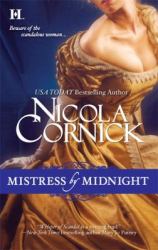 Mistress by Midnight by Nicola Cornick

Lady Merryn Fenner is only interested in academics and has long given up girlish dreams of love and marriage after watching her dearest brother destroyed by it. And she’s determined to bring down the man she believes is responsible: Garrick, the Duke of Farne. When a freak accident traps them alone together forcing their marriage, they discover the truth about the past as well as their conflicting feelings for one another. I especially enjoy how Cornick’s stories are inspired by real life historical events. Book three in her provocative Scandalous Women of the Ton series. 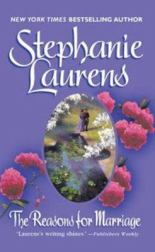 The Reasons for Marriage by Stephanie Laurens

This is an early Laurens’ novel and I think it’s one of her best. Jason, the Duke of Eversleigh, needs to marry after the death of his eldest brother, the heir, and he sets his sights on his friend’s sister, Lenore Lester. Miss Lester is perfectly content to be mistress of her brother’s large household in the country, with her books and her gardens, and has no reason to marry; in fact, she adopts a dowdy exterior just to discourage suitors. But the Duke sees through her ruse and is determined to win her and show her the real reasons for marriage. Book one in the Lester family series. 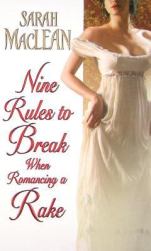 Nine Rules to Break When Romancing a Rake by Sarah MacLean

“On-the-shelf” spinster, Lady Calpurnia Hartwell, has had enough of her dull life. So she creates a list of things she wishes to accomplish: learn fencing, gamble at a gentlemen’s club, and fire a pistol to name a few. She also needs the help of someone not afraid to break the rules: the scandalous–and handsome– Gabriel St. John, the Marquess of Ralston. First in MacLean’s Love by Numbers series. 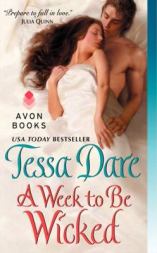 A Week to Be Wicked by Tessa Dare

Geologist Minerva Highwood is on a mission. Well, make that two missions. She is determined to present her research to an academic society in Scotland and also to prevent a certain roguish lord from marrying her beloved and fragile sister. She approaches the wicked Colin Sandhurst, Lord Payne, and proposes he escort her, thus avoiding marrying her sister, for which she will pay him handsomely. And so begins their hilarious road trip in a tiny carriage where they will confront their fears, their secrets, and their passion. This is the second book in Tessa Dare’s delightful Spindle Cove series, about a militia that comes to a seaside English village where mostly spinsters reside. Note: Dare (a librarian) has said that her inspiration for this series was Jane Austen’s Pride & Prejudice, when the militia came to Meryton, thus causing the youngest Bennet girls to go crazy for the handsome officers.

*This post is the first in a series highlighting my favorite historical romance novels, my new favorite genre, because it is filled with only happy endings,  history, wonderful stories, enchanting characters, and amazing writing. Many thanks to Eleventh Stack bloggers Jess and Sheila, for inspiring me to try them, and to the authors themselves for writing stories I love to read.