Mirror to the Past

Just as the Civic Arena tore apart the relationship between downtown Pittsburgh and the Hill District neighborhood, that dome, known as The Igloo, is being torn apart now. In 1960-61, black and white images of the dome’s construction  were captured by a local studio and Pittsburgh Courier photographer. From 1937 to 1983, Teeny Harris snapped photos of events and locales central to the African American experience in Pittsburgh. His images hold a mirror to Pittsburgh’s past. Since 2001, Carnegie Museum of Art has archived nearly 80,000 Teenie Harris negatives, with nearly 60,000 images scanned and cataloged to date. 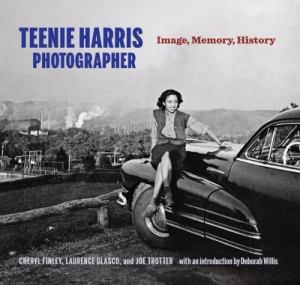 Sit with me at Carnegie Museum of Art’s current exhibition, Teenie Harris, Photographer: An American Story. In a darkened gallery, a jazz soundtrack—newly commissioned and recorded for this installation—sets an appropriately bouncy mood. Seven bigger-than-life projections flash on and off, each projection releasing a volley of images. Nearly 1,000 Harris photographs are grouped in seven themes: “Urban Landscapes,” “At Home,” “Style,” “Crossroads,” “Gatherings,” “Words and Signs,” and “Rise and Fall of the Crawford Grill.”

The Crawford Grill jazz club, the first incarnation of which was demolished for construction of the Civic Arena, once crowned the Hill District. Do you see that glittering piano on the stage, tiled entirely with mirror? Who is the woman playing and singing? Look, there’s Satchel Paige seated at the bar, regaling a group of friends. According to the Pittsburgh Courier newspaper of July 26, 1941, “Satch’ is shown telling . . . how he struck out Joe DiMaggio three times and beat Dizzy Dean four out of five. Satchell is slated to pitch in the East-West game Sunday.”

With seven scenarios projected at one time, we could spend hours in this room before we’d see all the available Harris photos. Catch the ones you missed, or revisit favorites on the Museum’s web site. Each image is carefully annotated. Visitors to the exhibition are encouraged to add their own knowledge of identities, locales, and circumstances to the archive.