As an outreach librarian for the Carnegie Library of Pittsburgh, I find myself in various neighborhoods throughout the city from week to week. In my year-end reflections, I’ve realized that through my job I’ve had the opportunity to discover new (to me) or otherwise unfrequented parts of this exquisite city of ours. Thanks to some programming I’ve been involved in over the past year, I’ve become much more familiar especially with two of our more western neighborhoods – The West End and Sheraden.

The West End branch of the Carnegie Library of Pittsburgh is one of our 19 locations which has had the benefit of a recent renovation. Now replete with a newly paved parking lot and elevator access, along with a very warm and comforting sitting area, this little branch is managed by colleague Mark Lee. It is a gem in the West End neighborhood both physically and with regard to the multitude of programming that goes on both in and outside of this sweet space, provided to visitors by a very excellent and welcoming staff.

The West End branch of the Carnegie Library of Pittsburgh

Those of you who only know the West End as that place at the end of the West End bridge as you leave Heinz Field, would be surprised to know of all the library activity that goes on in that neighborhood. Beyond the branch at the corner of Neptune and Wabash are also the offices of the Allegheny County Library Association. Here, county librarians and library advocates work to promote library services around the county. In addition, just next door to the West End branch is the Library Support Center, which houses some great library workers who are responsible for everything from cataloging and labeling the many items that you see on our shelves, to the shipping department responsible for getting those materials out to the city and county libraries.

Here, too, resides the wonderful sorting machine, the staff who attend the machine, and van delivery staff (10 drivers, 1 manager and 8 vans!) – all of which make it possible for your requests to go from one library in the county to another in the matter of just a few days. These special workers are akin to Santa’s elves for the magic they perform in sorting and delivering to your local library that bestseller, DVD or much needed item for your child’s school project. (In 2013 alone, 4,099,800  library items were moved among the 74 libraries served by the shipping center).

A portion of the magical sorting machine which sorts hundreds of thousands of items a month!

Just beyond the West End, over a hill or two and around a couple of bends (through the hamlet of Elliott – which requires some further research on my part), one eventually gets to the neighborhood of Sheraden not even 2 miles from the West End. Here, the Sheraden Carnegie Library branch (headed by Ian Eberhardt, whom you may have seen on your TV as of late) shares a building and hallway with the Sheraden senior center, tucked away on Sherwood Avenue. Although one of our smaller branches, this location lacks for nothing in terms of programming, and has an extremely welcoming and helpful staff too!

For those of you who aren’t familiar with this neighborhood, it is home to what I believe to be one of the most beautiful school buildings in the city of Pittsburgh, Langley K-8. Named for the same Langley of Langley Air Force base fame – Samuel Langley, a 19th c.  Western University of Pennsylvania (University of Pittsburgh) astronomy professor. The school sits high atop a hill in Sheraden, but be careful not to attempt to gaze at this school as you’re making your way through the busy intersection that sits just below, as I have a tendency to do when I’m out that way. 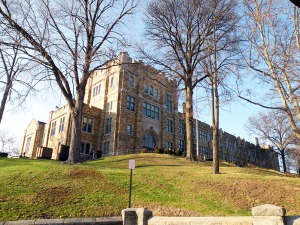 Both of these western neighborhoods, and more specifically, the senior centers that reside nearby to the neighborhood branches welcomed me for some exciting technology programming recently. I’m grateful to the centers, their directors and the fact that these programs opened up new doors and vistas in my daily work. I’m looking to discovering more of our many neighborhoods in the coming year(s) of my outreach and hope to share some more with you in 2015.

There have been many great partnerships throughout history – Orville and Wilbur, Hillary and Norgay, the Steves (Jobs and Wozniak), Rodgers and Hammerstein, Ben and Jerry,  the Curies, Bert and Ernie, Sherlock and Watson, Katniss and Peeta  -just to name a few. These partnerships, whether real or fictional, were formed over like interests and are a testament to what can be accomplished when people work together towards a common goal. Right here in Pittsburgh, The Carnegie Library of Pittsburgh is creating some great partnerships with the goal of literacy throughout the city.

I’m extremely fortunate to be a part of the Carnegie Library of Pittsburgh’s Office of Programs and Partnerships (OPP). Within this department which is housed at the East Liberty branch of CLP, we have a great collection of staff reaching out to a variety of groups in their own unique way, forming partnerships and conducting programs throughout the city to promote a variety of literacies within the community.

The BLAST crew regularly head out to the Pittsburgh Public Schools and related events, connecting with our city’s young readers and future leaders, aiding in early learning and literacy skills.

The Labs @CLP work at providing space and time for teens to connect to new learning experiences via technology.  Teens, an often neglected and misunderstood demographic, are able to engage with fellow teens and library staff through unique, technology-centered literacy.

LYNCS, of which I am a member, reaches out to various groups in Pittsburgh to provide a variety of literacies in neighborhoods, communities and schools. We run the gamut of providing pre-school story times, senior citizen technology programs, information and hands-on technology  at community events, and financial and job literacy to Allegheny County Jail inmates alongside our colleagues from the various neighborhood branches. In addition, the LYNCS crew has managed a temporary, pop-up library in the neighborhood of Allentown, bringing library services and programming to a community lacking easy access to our neighborhood branches and their services.  Over the past year and a half that we have been in this temporary setting, we have had the pleasure of working with great community partners to provide access to library services, unique programming and a community center for this often neglected and little known Pittsburgh neighborhood. A great result of the partnerships formed with various Allentown and other Hilltop groups, has led to the pop-up library  transitioning to the Allentown Learning and Engagement Center (ALEC), a project which would not have been possible without the partnerships formed with our community neighbors.

LYNCS colleagues at an outreach event.

The entire staff of The Carnegie Library of Pittsburgh is working to reach out to all of the city neighborhoods, not only through library services and programming within the neighborhood branches, but also through a variety of outreach initiatives encouraging literacies beyond its brick and mortar locations. We are happily building new partnerships, whether it’s at the circulation desk or in a city park, not just during this National Library Week, but every day of the year.

Carnegie Library of Pittsburgh to Open Location on the Moon?

There’s something mysterious going on around here, and I think I’ve figured out what it is:  after using my Sherlockian powers of deductive reasoning, I can only conclude that the Carnegie Library of Pittsburgh is about to open its first extraterrestrial location…on the moon.

I know it sounds crazy, but hear me out:  there’s a new initiative afoot called CLP LYNCS, which stands for the Library in Your Neighborhood, Community, and School–catchy, no?  It’s a wonderful program designed to bring what the library has to offer directly to where you live, work, and play.  With presentations designed for children, teens, and adults, LYNCS can open up the library for you in a way you might never have imagined.  And if you sign up for their e-newsletter, you’ll be in the know about any new programs and services long before your friends and neighbors will.

And all of that is lovely!  But I think there’s more to this project than meets the eye.

You see, LYNCS can also stand for Lunar Yurt : New Carnegie Station.  And it just so happens that LYNCS is hosting a special event at the Pittsburgh Public Market on Friday, April 15th 2011.  Scheduled activities include a ribbon-cutting ceremony, drop-in storytelling, and a fun presentation called 30 Books in 30 Minutes, which is kind of like speed-dating for you and books: the library staff will give you a quick summary, and if you’re intrigued, you can check out the titles on the spot.  Call me crazy, but that much fun in such a great location clearly spells “library on the moon.”

There’s only one way to find out.  Make your way down to the Pittsburgh Public Market on April 15th–after you’ve finished your taxes, of course–to meet the LYNCS staff and get to the bottom of the quasi-lunar mystery that’s decidedly out of this world.