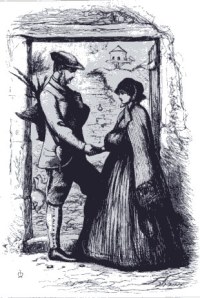 Sometimes, I despair of modern fiction.  Don’t get me wrong; I’m down with the post-moderns and the post-post-moderns.  Really, I’m ready to read Steven Millhauser anytime.  I’ve done my fair share of Don DeLillo and Thomas Pynchon and all.   The most enjoyable modern literary fiction, in my opinion, is being written by women.

Still, sometimes I have to turn away.  It seems there is no heart, it all seems so hollow: “Pay no attention to the man behind the curtain”  begins ringing in my brain.  When I start thinking this way, I head off to read a pulp novel or  cerebral sci-fi or something that goes bump in the night.

And then there are the times I head for Anthony Trollope.

Trollope is too often lumped together with the old dead white guys in the elephant’s graveyard of literary fiction.  And it’s a shame, really, because Trollope, though he is a classic in every sense, hardly ascribes to some of the less laudable characteristics of said dead elephants.  I’m thinking blatant sexism, I’m thinking overt racism, I’m thinking all-encompassing colonialism, and probably a few more isms thrown in for good measure.

If forced to describe why I enjoy Trollope so well I have to say that he is something of an old school literary mashup of the best of Jane Austen and Charles Dickens.    In my current flight from recent fiction, I’m reading Framley Parsonage, the 4th volume in the “Chronicles of Barsetshire,” a six volume series set in the fictitious town of Barchester and its environs.

When it comes to relationships, Jane Austen is his most influential mentor.  Trollope learned well how to detail the extreme subtleties of social interaction and courtship, conjuring a big something from lots of little nothings.  As with the novels which preceed it in the series, Framley does not disappoint on this score.  In addition, none of the rampant sexism and misogyny of the age is present; yes, there is what, by today’s standards, might appear to be the occasional twinge of political incorrectness, but, given the times, Trollope makes sure you know at the outset, and throughout, that his heart is in the right place.

One could hardly be a student of Austen otherwise.

Dickens and his social conscience find their place firmly in the works of Trollope.  If the intricate machinations of the legal system satirized in Bleak House made your head spin, the six Palliser novels (and their wonderful BBC adaptations) will make you swoon.   The political counterpart of these legal themes may be found in Trollope’s stinging attack on the British political system in Framley Parsonage.  In addition, though no one perhaps can ever match Dickens penchant for canny names, Trollope’s Miss Proudie, Obadiah Slope, Roger Scatcherd, the Duke of Omnium, and Nicholas Sowerby do humbly follow in that tradition.

So, while I pause before I take the plunge into Rick Moody’s highly praised The Four Fingers of Death, I’m content to relax in the cozy atmosphere of what may be perceived as a precursor to today’s chick-lit novels.  Go ahead, try out The Warden, the 1st novel in the Barsetshire series.   I don’t think you’ll be disappointed.  And if you are, well, there is always another of the new highly praised novels you might want to turn to.

For me, I’ll be returning to David Mitchell’s The Thousand Autumns of Jacob De Zoet; it’s supposed to be a knockout and it’s where I’ll definitely be heading after my vacation in the more relaxed, focused time of Anthony Trollope’s fiction.