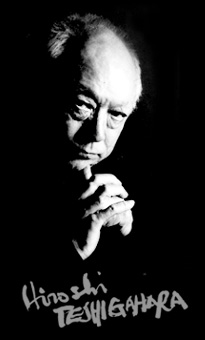 A few weeks back, my partner was heading out of town for the weekend, which is when I hightail it for the foreign film section of the Film and Audio Department. It’s not like my mate won’t watch anything with subtitles; it’s just her amusing propensity for falling asleep that keeps me from bringing home foreign titles when she’s around.

This time I picked up a film at random that looked interesting entitled The Face of Another (1966). I was completely blown away. The plot, about a man in the near future that receives a face transplant (N.B.: this was the week before the Cleveland Clinic announced the groundbreaking first face transplant in the United States), was surreal, the cinematography spectacular, and the existential conundrums tackled in the film at once mind-boggling and disturbing.

My kind of film.

I soon discovered that Face of Another was part of a 3 film set (circulated separately at the library) by master Japanese filmmaker Hiroshi Teshigahara. I quickly snatched up the other two films, The Woman in the Dunes and Pitfall, and was equally impressed.

The Woman in the Dunes (1964) is widely regarded as Teshigahara’s masterwork and it does not disappoint. Once again, the plot is slightly surreal; an entomologist is tricked by a group of men to enter a giant sand pit to “help” a woman there and soon discovers he has been abducted. He is forced to live in a shacklike house in the pit with the woman, as they mindlessly shovel sand into buckets for their captors above. The stunning black and white photography, as in The Face of Another, is hypnotic; some individual frames artistically rise to the level of still art photography by someone like an Ansel Adams or Elliot Porter. Stunning doesn’t even begin to convey the effect.

The third film in the set, Pitfall (1962), is, on the one hand, a more conventional story and, on the other, is atypical in its narrative exposition. Pitfall is the story of Japanese itinerant miners, a dispute between two labor unions, and three murders. What is unconventional is that a good part of the story is seen through the eyes of the murdered individuals who cannot be seen by the living but who can see each other. Part murder mystery, part avant-garde cinema, and part cinematic discourse for workers’ rights, Pitfall was Teshigahara’s first full-length feature and a amazing piece of cinema for all that.

Each of the films in the three volume set comes with a “video essay,” a term that seems somehow quaintly antiquarian, by the film critic James Quandt. The essays are at once fundamentally informative and cinematically erudite, a fine balance that never teeters too much in one direction or the other. Considered individually, they are excellent extras; as a whole, the three essays are something of a effective introductory guide and in-depth cogent overview of Teshigahara’s work. As with most releases from the Criterion Collection, these extras are must-see viewing.

To give you a taste of what Teshigahara’s work is all about, here is a short excerpt from The Face of Another:

If you watch these and like them, the library has a 4th Teshigahara film: Rikyu (1989), filmed in color, and something of a departure in both presentation and tone from the earlier films, all three of which were done in collaboration with famed Japanese novelist, Kōbō Abe. Rikyu is the story of the 16th century Japanese tea master and the conflict between his aesthetic values and the violent politics of his time. Though very different, I highly recommend this film for anyone interested in Japanese cinema and culture. You won’t be disappointed.