About once a year, I try to read the Iliad. Sometimes I make it through the whole thing and sometimes I get a little distracted and lose momentum.  I have a worn paperback of the Fitzgerald translation that I keep close and I have sampled the Fagles too. I like them both.

Everybody knows the general outline. A royal runs off with another royal’s wife which triggers a big war where a lot of people get killed, including Ancient Greece’s version of Captain America. Gods are messing around and arguing with each other while the aforementioned Achilles moves inexorably to his fate. Our hero has a contract dispute with his boss Agamemnon and goes on strike, whereupon his boyfriend gets offed. He comes charging back like any action hero about three fourths of the way through the movie and brutally avenges the death. After the Trojans fall for one of the dumbest ploys ever, their city gets sacked.

It’s all pretty awesome. The Iliad is a titanic pillar of Western literature and has been redone, reworked, translated, and adapted over and over again. There is an Iliad inspired story out there to suit any taste.

As far as which translation to read, I recommend just flipping through an edition and seeing how the language feels. For me, Fitzgerald is a great balance, economical and lyrical. If you want to spend a lot of time listening to educated people argue, just Google which translation is best. People spend a great deal of money and effort for those Classics degrees and they have to use them somewhere.

For adaptations we can look at two ends of the spectrum: 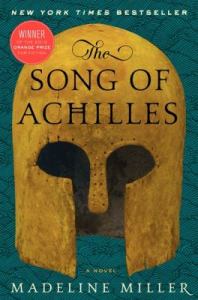 The Rage of Achilles by Terence Hawkins is packed with sex and violence and written in punchy, staccato prose. The book begs you to describe it as “edgy”.

For more sensitive souls, or simply to suit a different mood, is The Song of Achilles, a tender story built around the romance between Achilles and Patroclus.

And what about that most famous of bromances?  It’s fascinating to see how prevailing attitudes shape interpretation.  Every era puts its own spin on the relationship.  In some accounts, from less progressive times, the pair are simply close friends. For the really curious, an impressive non-fiction tome sits waiting on the fourth stack (aka, the Mezzanine). In The Greeks and Greek Love, James Davidson performs a thorough social and sexual survey of ancient Greece.  With the info in this book, you might finally be able to put the Achilles-Patroclus issue to bed. 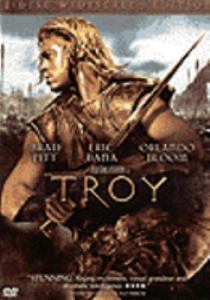 In film, we have the clunker Troy, starring Brad Pitt’s physique. There are worse movies. Sometimes serious, sometimes ridiculous, this film is hard to like but somehow equally hard to hate.

There is much fascinating debate concerning whether or not the Trojan War was based on some actual historical event.  The documentary In Search of the Trojan War is a great place to learn about Troy’s discovery and the issues and personalities involved. It’s a story as dramatic as anything Homer could have written.