“It is always difficult to predict — especially the future.”– Chinese proverb

I have often associated the study of economics most closely with the scene in Ferris Bueller’s Day Off where Ben Stein’s monotone economics teacher drones on and on about something called Voodoo Economics. So imagine my surprise when a few years ago I became addicted to NPR’s Marketplace. I’m not sure how or why this happened, as I’ve never been a financially savvy individual–I couldn’t tell you the exact difference between the Dow, the NASDAQ, and the S&P 500 without looking it up, and even then, my interpretation (like most things in my life) might be a little fuzzy. But I genuinely get a kick out of listening to this show, and have been glued to my radio lately—listening for news on the Euro Crisis/Greek bailout, and stateside, for news on Occupy Wall Street. It probably doesn’t hurt that I have a voice crush on Kai Ryssdal, who I picture as a friendly surfer dude, which makes the economic theory go down a little easier.

With so much global financial instability these days, now seems as good a time as any to learn a thing or two about how economies work (or don’t), and what sort of job opportunities and industries we might have to look forward to in the future.

A couple books to get you started with the unpredictable world of economics:

Naked Economics: Undressing the Dismal Science by Charles Wheelan. A thoughtful guide to economics essentials. Included are clear definitions of terms like GDP and inflation. Also makes the argument that there is a role for governmental regulation, and discusses the pros and cons of taxation. Topics like productivity, trade, and globalization are covered as well.

How Markets Fail: The Logic of Economic Calamities  by John Cassidy. A finalist for the Pulitzer Prize, this book provides an historical context for the meltdown of 2008. Cassidy also argues that the free market is not in fact self-correcting, and that federal regulators should have oversight responsibility for mortgage bankers and lenders.

If you’d like to delve further into the financial meltdown of 2008 and our current financial state, here are even more books:

The Big Squeeze: Tough Times for the American Worker by Steven Greenhouse

Chronicles the credit and mortgage crisis of 2008, including what participating institutions were doing during the crisis, and who may ultimately be responsible for what happened.

Panic: The Story of Modern Financial Insanity by Michael Lewis

Looks at five financial crises in recent history including the 1987 stock market crash, the Internet bubble, and the sub-prime mortgage crisis, and focuses on how public knowledge differed from what was actually taking place behind the scenes.

Paul Krugman, the recipient of the 2008 Nobel Prize in Economics, significantly updated his 1999 book to focus on the financial crisis of 2008 and its possible aftermath. Includes a discussion of what sort of financial regulations should be in place to keep the global economy from falling into deep recession, and possible depression.

The Shock Doctrine: The Rise of Disaster Capitalism by Naomi Klein

An exploration of what Klein calls “disaster capitalism,” the portion of the global free market that promotes crises and wars, as well as privatization that benefits large corporations and powerful interest groups.

We also have DVDs to help make “cents” of the economy:

And here are a couple helpful web resources: 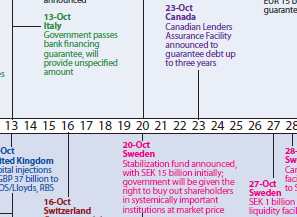 Timelines of Policy Responses to the Global Financial Crisis
The Federal Reserve Bank of New York has two helpful interactive timelines dedicated to the 2008 U.S. financial meltdown, one domestic and one global.

Credit Crisis: The Essentials – The New York Times
The New York Times has a page devoted to resources about the credit crisis, including an overview of the crisis, an interactive media timeline, videos of interviews, and links to articles.

Business – Al Jazeera [English]
Provides articles about the effects of the economic crisis.

A helpful guide for teachers interested in teaching lessons on globalization and the economic crisis, by focusing on current events. Includes videos and sample lesson plans.

And now, let’s do the numbers,