One day I was about to go to lunch and realized I had nothing to read. The horror! I scanned the shelves at my branch and settled on a book whose cover had always fascinated me, but I’d never gotten around to reading. Also, kicking around in the back of my head was that it was being adapted into a movie by Tim Burton. But we’ll get to that later … The book was Miss Peregrine’s Home for Peculiar Children by Ransom Riggs.

Here’s why you shouldn’t judge a book by its cover. For whatever reason, I always thought Miss Peregrine would be about circus sideshow performers, not unlike Geek Love. I literally have no idea why I thought that, but I went into the book with that mindset. Turns out I wasn’t that far off. Miss Peregrine follows Jacob, our sixteen-year-old narrator. After his grandfather dies, Jacob travels to an isolated island off the coast of Wales. There he finds the rundown ruins of Miss Peregrine’s Home for Peculiar Children, a mythic place often mentioned in the stories from his grandfather’s salad days. Despite the school’s decrepit remains, Jacob soon learns that the unusual children from his grandfather’s stories may still be alive—and may still be children.

The book takes its time, but I was engrossed by the mystery. It does end somewhat abruptly, though, as it is the first in a series. If you don’t feel like committing to two more books of Peculiars, I’d sit this one out. Despite its shortcomings, what really makes Miss Peregrine stand out is the weird vintage photography interspersed between the pages. If you liked that aspect (or vintage photography in general), I’d advise you to check out a book of found photography that Riggs edited called Talking Pictures: Images and Messages Rescued from the Past. At times sad, at other times hilarious, it gives you a feeling of nostalgia even if it’s for a time you weren’t alive for.

Normally if I read a book I like, I’ll order the audiobook version for my mother, but for this one I really felt that the photography added something to the book that couldn’t be conveyed in audio form. She usually likes what I recommend, the only exception being Me and Earl and the Dying Girl. That disparity caused such an argument that I’ve had to eat my sandwiches with the crust ever since. We’ll see how she likes this one.

As for Burton’s adaptation (I told you we’d get to it), when I began reading Miss Peregrine, I couldn’t picture it as a Burton film. I’m a fan, but the presence of (sort of) time travel and stories of Nazis made me think of a Steven Spielberg or Robert Zemeckis movie. It wasn’t until I was well over one hundred pages in that I could see the Burtonesque potential.

Fans of Xavier’s School for Gifted Youngsters Miss Peregrine’s Home for Peculiar Children will notice some pretty obvious changes right away, but I’m optimistic. I’m probably more bummed that Burton’s frequent collaborator Danny Elfman isn’t scoring the film than I am about any disparities between the book and movie. The gruesome tentacle-mouthed Hollowgast and Samuel L. Jackson as a dead-eyed Wight both look particularly promising. And the titular children look like they walked off the pages of Burton’s The Melancholy Death of Oyster Boy & Other Stories.  It appears that Burton turned Miss Peregrine into a concise standalone film more in the vein of Edward Scissorhands and Big Fish than Alice in Wonderland or Dark Shadows. In other words, a good Tim Burton film.

Have you read the books? Are you stoked for the movie? Let us know in the comments below! 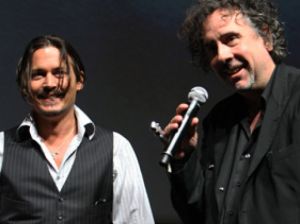 Photo taken from MTV.com – all rights reserved to same – click through to read an interview with Tim Burton

In anticipation of Tim Burton’s Big Eyes coming out on Christmas Day, I’ve been having my own Burton retrospective and recently watched Edward Scissorhands for the umpteenth time.  With this film, Burton found a kindred spirit in Johnny Depp that has survived over two decades and has resulted in some of Burton’s best-known films. While he isn’t in Big Eyes, Depp has starred in eight of Burton’s seventeen films. That is, when he isn’t busy making drunken appearances at awards shows or getting fossils named after him.

Below is my much mulled-over ranking of those eight Burton/Depp cinematic pairings.

This film had the potential to be a hit.  On paper, a film about a dysfunctional family with a vampire patriarch is right in Burton’s wheelhouse. And besides, he and Depp both had a fondness for the soap opera from which the movie was based.   Sadly, that passion is never present on-screen.  While Burton has previously struck a wonderful balance with macabre humor and black comedy, he falters and stumbles here.  Perhaps it was the audience’s vampire fatigue or the overwhelming presence of the juggernaut known as The Avengers, but the film only grossed just over half of its production budget.  This film, along with the next one, really made me question whether or not Burton and Depp’s artistic relationship had grown stagnant.

The movie that grossed over a billion dollars worldwide also has a 51% rating on Rotten Tomatoes so make of that what you will.  One would think that it would be a visual treat, but it’s apparent the actors are acting against a green screen for most of the film. The backgrounds look flat and lifeless and that’s exactly how I’d summarize the entire film—flat and lifeless.  It’s truly saying something when the scenes that take place before Alice falls down the rabbit hole look more vibrant than the scenes in Underland.

Giving a plot to a story that famously had no plot could have worked, but Linda Woolverton concocted the most generic chosen-one-must-fulfill-a-prophecy-and-vanquish-evil plot imaginable.  It was doubly disappointing for me because longtime musical collaborator Danny Elfman’s score was one of the best he’s done in recent years.  I listened to the score before I saw the movie and it conjured up images of fantastical epics.  Sadly, the only thing fantastic about the movie is that someone thought it would be a good idea to commit this to film.

I remember freaking out when that trailer came out and loved the movie when I saw it, but have since reassessed my opinion of it.  There’s nothing really technically wrong with it, nor is it a bad film; it’s just an unnecessary remake.  Then again, I don’t have an intense fondness tied to the original, despite Gene Wilder’s wonderful turn as the eccentric chocolate maker.  Still, this interpretation is closer to Roald Dahl‘s book and I actually prefer Elfman’s songs to the ones written by Anthony Newley and Leslie Bricusse.  Wilder’s interpretation was, and still is, iconic, so it was important for Depp to do something completely different in the role.  And, sure enough, he did.  I always felt that it was unfair that Depp’s performance was compared to Michael Jackson.  If you’ll recall, Michael Jackson loved kids.  Willy Wonka hated them and turned them into candy.  Get your facts right, Internet.

What are the top five Burton/Depp movies? Click through to find out!