I read a news article on Tuesday, 6/11, about how sales of George Orwell’s book, 1984 have skyrocketed in the wake of the NSA surveillance scandal.

I just so happen to be reading the novel 1Q84 by Haruki Murakami; translated from the Japanese by Jay Rubin and Philip Gabriel. On this very same Tuesday, I come to a passage in the novel with a synopsis of 1984. Coincidence?

I am finding 1Q84 to be a dense fantasy, full of unexpected, surreal twists that keep me reading. As the protagonists are narrating, I hear distinctly Japanese voices in my head.

I also happen to be reading Inferno by Dan Brown as an eBook on my iPhone. Another book about a well-known book! I didn’t do this on purpose! The only reason I chose this one is that it came up first on the eBook browsing list, and I liked The Da Vinci Code well enough. I am kind of enjoying it, even with unwieldy and inelegant sentence structures which say the same thing in the same exact way over and over again. I feel like the author has underestimated the intelligence of the readers and please, we have all heard about Dante’s Inferno before. As I have been trying to get past these shortcomings, the plot continues to hold the promise of being engaging, except for the desperate and overt way it has been beating suspense over my head.

I also liked the film, The Da Vinci Code, well enough, mainly because I love Tom Hanks. Oddly, the third book that I am in the middle of, Cloud Atlas, has also been made into a movie starring Tom Hanks. I don’t think I spoiled the book for myself by checking the movie out from our new “DVD bestseller” area yesterday. The reason I chose this one was that it was there, randomly, on a shelf where new and popular DVDs are either in or not. It was well acted and very thought provoking, though it was a tad long and the makeup jobs were awful. Where is CGI when you need it? 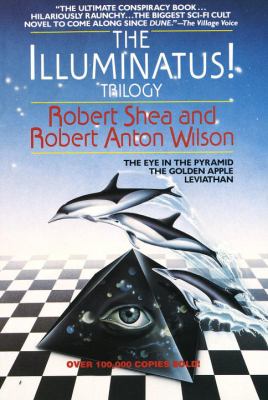 When I see coincidences everywhere, I immediately think about The Illuminatus! Trilogy by Robert Shea & Robert Anton Wilson. This fnord “fiction” book will make you feel like you want to take another look at what you thought was the truth. And it kicks Dan Brown’s butt.

Did I somehow subconsciously choose books whose running themes are about other books?  Part of the plot of 1Q84 (so far) is about an author who helps to write a popular book, and I am a little surprised by the amount of references to western music, art and literature. The running theme of Cloud Atlas is how different authors of pieces of work, like a diary or a piece of music, will directly affect the consumer of that material in a subsequent generation. Dan Brown’s Inferno incorporates many old masterworks as plot devices.

Is it a coincidence that each book and its predecessor have a looming, all seeing presence?

Is Big Brother (and/or the NSA) really watching me?