There and Back Again: A Mentor’s Holiday, or The Labs @ CLP in Spain (Part II)

(This is part 2 of a two part blog post, so check out Friday’s post to catch up!)

I don’t speak Spanish. Like many Americans, I took two years in high school and we focused on conjugation more than conversation. And though I spent the last three weeks before departing crushing it on Duolingo, I wasn’t going to get by with that level of Spanish. 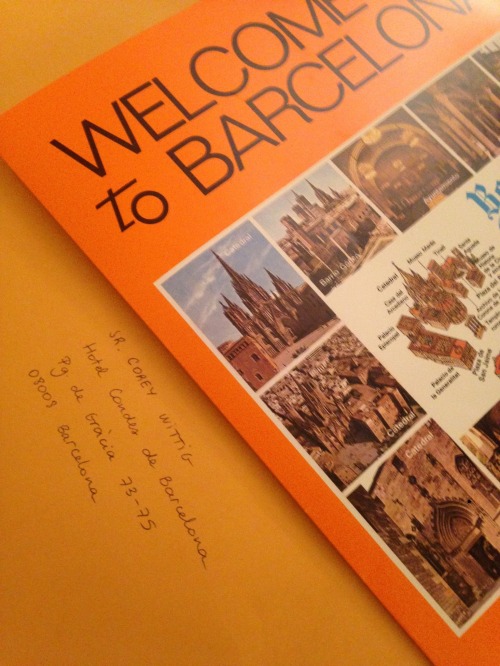 Photo taken by the author.

So, I was happy to find that at all of my speaking engagements I either had a translator (through a headset — as did the audience) or people spoke pretty good English. Still, the week long struggle to communicate gave me a sliver of insight into what that experience must be like for immigrants to the U.S. I thought of the largely Kenyan population who attend programming at CLP – Allegheny and the Spanish speaking population in Beechview, and I thought of our Let’s Speak English programs across the system helping new immigrants get comfortable with the language as well as the other language conversation programs that empower our users to learn new languages (and natives to converse in their mother tongue).

All of this got me in the right head space to talk about the role the library and library staff play in encouraging learning and community development. 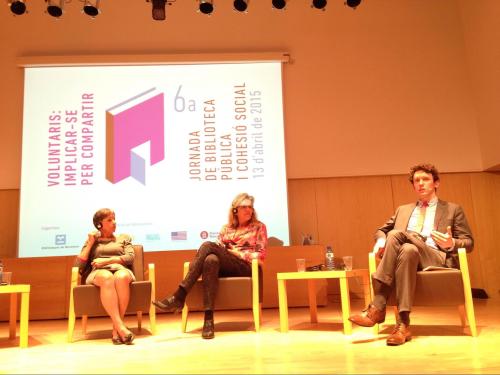 The event was wonderful and I immediately connected with the theme of volunteerism, which is a hot topic in Catalonia. There is a traditional belief that it is (in the words of one of the speakers) “perverse” to give volunteers any kind of incentive. This was challenged by Lluc Marti Pe of the Foundation for Catalonian Volunteers who believes that volunteerism needs to be more like the American model in order to encourage greater social engagement. I talked about CLP volunteers and all of the amazing projects they help us complete. Peer to peer mentorship through teen volunteers has always been a goal of The Labs and this perspective was welcomed by the audience.

My presentation was well received and I immediately noticed that The Labs program model (access to a low pressure informal learning space with technology and mentors to encourage learning) was foreign to Spanish library workers. But they loved it. I let them know that this was still pretty new to us in the U.S. too, and, while we’re still working out the kinks of our programming, we feel confident about the benefits and steadfast about our goals.

The presentation came to life every time I was able to work with youth in Spain. Below is a video compilation of stop-motion animation videos created by teens at a Spanish FabLab (a makerspace based on a design out of MIT where the focus is on fabricating physical artifacts). I got to work with these amazing teenagers on my second day in Spain and it gave me all the energy I needed to make it through the rest of the trip with confidence that what we teach teens in Pittsburgh is relevant and of interest to teens in other places, too.

The goal of all of my workshops was to teach basic stop-motion animation and to ask teens to create a film inspired by what it’s like to be a teen in Spain (Here’s my presentation on stop-motion, if you’re interested).

The events I spoke at in Madrid and Valencia and the workshops I provided for youth in those cities stood to further convince me of the importance of this work. Mentors make magic happen. Librarians are powerful, life-changing community members. We are all life-long learners and learning doesn’t happen in schools alone. It’s important that libraries, museums, and other community sites of informal learning also embrace what it means to be a learning space. That’s our responsibility.

People are always talking about the necessity of libraries in the 21st century. What happens when books are all digital? Well, if we aren’t about books alone, but free and open access to information and learning then we have so much we can sink our teeth into.

Sometimes we have to go away from home in order to find a connection to the place we left. I was feeling that during my trip to Spain. Talking about The Labs and CLP’s great programs and services allowed me to contextualize our mission and our values. It showed me that these lessons are universal, even if I already felt that was true.

A librarian in Madrid told me that The Labs sounded like science fiction. she said that the American model of libraries as community spaces for learning was even better than what she imagined. How great is that?

If you read this blog, you’ve probably felt that feeling.

"If we could somehow HARNESS the lightning..."

On April 7, 2006 a lightning bolt of Doc Brown proportions caused serious damage to the Carnegie Library’s ailing, but historic, Allegheny Regional branch.  The library, on Pittsburgh’s North Side, has been closed ever since, and public services have been relocated to the new Carnegie Library of Pittsburgh — Allegheny location. Lots of important work, however, is still going on behind the scenes at the damaged location.

Originally known as the Carnegie Free Library of Allegheny (the first tax-supported Carnegie Library in North America), the Allegheny Regional Library has, for the past four years, been used as CLP’s Depository — a place where orphaned, historical, and otherwise important material can be preserved, cataloged and stored as necessary.  The goal is to shape the collection into a relevant and accessible one.

Collections that would fit better in another institution’s collection have been sent to new homes.  Many pre-1923 monographs and journals are being digitized locally as part of an IMLS grant that the library received to digitize materials related to Pittsburgh’s iron and steel industry. These items have been selected by a team of Main Library staff, and metadata is being produced by our cataloger-librarians; once it’s ready, our IT staff will upload the digitized images to a searchable, online storage space.  These will be available both through the catalog and and at a special Carnegie Library of Pittsburgh website, where the public will be able to view documents and comment on them using social network tools developed by IT staff.

Librarian and conservation coordinator Jackie Mignogna says, “We’re always trying to find good fits for things that don’t relate to the Carnegie Library of Pittsburgh’s mission or collecting policy anymore.  We have also uncovered some great items to re-introduce to our own collections. ”  This is true library work:  conservation and access.  It’s unrealistic to think that everything can be saved, or that it all belongs in the Carnegie Library of Pittsburgh in the 21st century.  Which of these items reflects the needs of our users and our community?  These are the questions librarians struggle with daily.

Things you didn't know librarians do...

In order to make the depository collection accessible, staff must not only catalog everything,  but also clean and repair/stabilize the items so customers may, once again, have the opportunity to access the information.  Most items were once listed in the old card catalog, but never barcoded for access through the online catalog.  Therefore, customers could not readily find them without a librarian’s assistance.  All of this work is being done by a committed team that includes Janet Templer (cataloging and access), Jackie Mignogna, Tara Walsh, and Sun Young Kang (conservation, preservation, and access), as well as a crew of other library staff and volunteers.  These efforts are overseen by Gladys Maharam, former deputy director and current project coordinator.

Seriously - how cool IS that?

From an incredible collection of journals dating from the 1800s to an assortment of books from the Vatican sure to make any Dan Brown fan salivate, the depository collection is chock-full of the stuff you think of when you think “library.”  Several hundred turn-of-the-last-century art folios are being stored in acid-free protective boxes.  Thanks to the depository staff, these rare books (some of the earliest pieces of the Carnegie Library of Pittsburgh’s collection) will be moved to state-of-the-art storage in the renovated East Liberty branch.

Recently I was lucky enough to volunteer for an afternoon at the depository, wiping soot from hundred-year-old trade journals with a dry sponge.  I came to appreciate how hard these folks work to save their collection; as Jackie Mignogna told me, “It’s dirty work…but someone has to do it.”

Editor’s note:  Some names were omitted for privacy reasons.  If you are involved in this project, and wish to be acknowledged, please leave a comment.  All photos copyright Corey Wittig, 2010.