I like to bake. I’m pretty okay at it. I’m far better at everything tasting the way it should than it being pretty (I’ll never be a cake decorator); it’s a good thing that cookies are pretty forgiving.

I spent last Friday with the oven cranked to 350 and worked on my holiday cookie stash. Chocolate chip, snickerdoodles, those peanut butter guys with the Hershey’s Kiss smooshed in and I got my first lesson in nut roll. This book is going on my to-buy list. Baker Ellen Jackson has a great collection of cookies we all know and love, with ‘twist’ options for each recipe. I tried the Snickerdoodles, and they are the best I’ve ever made. They didn’t go flat and still have a little bit of chew. I know a lot of people swear by this one (our Melissa M. included). Betty is often my go-to when I need something reliable. I haven’t used this one, but it comes recommended by one of the Woods Run patrons.  It’s filled with recipes that have won or earned honorable mentions in the Chicago Tribune’s annual contest. Our patron loved the apricot cookies!

Our family nut roll recipe? It’s from the June 2, 1988 issue of the Post-Gazette. We add a bit of honey and the filling is divided for the three rolls using the technical measurement system of Corelle teacups (the Spring Meadow set that many, like my mother, received for a wedding gift in 1979/1980, if we’re being precise).

PS – Is anyone else obsessed with The Great British Baking Show? Paul Hollywood and Mary Berry are my new heroes.

C Is for Cookie. That’s Good Enough for Me!

It’s that time of year. No, I don’t mean the time to buy and wrap more presents than you can afford. And also not the time to visit with people you really wouldn’t choose to hang out with, if you in fact actually had a choice. (Or is it??) I mean that it’s time to get in that kitchen and bake some cookies! These treats can be your homemade replacement for the usual capitalistic holiday gifts or just your way of saying a sweet “I love you” to those you’re going to be feeding over the next few weeks.

This week, my department will be holding its second annual Cookie Day. All of my colleagues bring in cookies, set them out on a big table in our office and we invite all of our fellow library staff to partake, at their leisure, throughout the day. It’s our way of saying thank you to those who work with us all year long.  (Feel free to copy our idea for your own group. It’s really rather low cost and low maintenance for the individuals throwing the shindig.)

But of course, in the true spirit of the holidays, I must go overboard. I’m not going to make just the one cookie to bring to Cookie Day. I’m going to be making at least 10 kinds of cookies, bars, and chocolate treats this season. I’ve given the members of my immediate family the option to select two types of baked goods. Plus, there are some cookies that I just HAVE to make for myself. So far, my baking list includes: buckeye bars, pumpkin snickerdoodles (A repeat from the pumpkin birthday extravaganza. Yes, they were THAT good.), at least three kinds of chocolate chip cookies, fudge, peppermint chocolate bark, lemon drops, and my current favorite thing – snickerdoodle blondies. There are a few other cookies nagging me and pulling on my heartstrings that will probably see the light of day as well.

As you can tell from the links above, I find most of my inspiration and recipes online. (Yay, Pinterest!) But as some of you who have read my posts before know, I absolutely ADORE a good cookbook. Here are a few that I found to help with your holiday cookie baking needs:

The Cookiepedia: Mixing, Baking, and Reinventing the Classics by Stacy Adimando

The Complete Photo Guide to Cookie Decorating by Autumn Carpenter

Crazy about Cookies: 300 Scrumptious Recipes for Every Occasion & Craving by Krystina Castella

The Daily Cookie: 365 Tempting Treats for the Sweetest Year of Your Life by Anna Ginsberg

Gluten-Free Cookies: From Shortbreads to Snickerdoodles, Brownies to Biscotti: 50 Recipes for Cookies You Crave by Luane Kohnke

So as you can see, we have cookie cookbooks for those willing to spend their entire weekend decorating tiny crisps of sugared dough to the hilt, as well as those who would rather throw some things into a pan and be done with it. Everyone can make something!

P.S. This is my favorite cookie cookbook. It’s the one I bought my mother as a Christmas present over 30 years ago and it is the one I did a little happy dance about when I found in a used book store.

A last minute holiday gift suggestion that can’t go wrong: if you’re not sure what to get that finicky person on your gift list, why not bake them some cookies? We have cookie cookbooks for all manner of cookie enthusiast–even those with dietary restrictions. Just a few of the over 400 cookie cookbooks to choose from:

Of course, if cookies aren’t your thing, you can also try making this, or this, or even this.

My colleague Irene‘s most recent post, ‘Tis the [crafting] season, reminded me of my long abandoned first and only knitting project. My goal this year is to give gifts I’ve made, and the idea of hand knit gifts appeals. Should I buy a new pair of needles and begin again? The First Floor offers a program twice a month called Carnegie Knits and Reads, where I could practice the art of knitting. But the gift giving season is near, and I’d likely be frustrated if I began a project now.

Instead I’ll rely on a skill I’ve been practicing since I stood on a chair to reach the kitchen counter, and that’s baking. Pies, cakes, and cookies make wonderful gifts, though cookies are easiest to wrap. Besides being homemade, these goodies meet another of my goals for gifts this year. They’re consumable. Cookies can answer the question, “What can I give the person who has everything?” (Or the person who declares “no gifts!”) As one terrific baker and cookbook author puts it, “There isn’t a gift that is more appreciated than a home-baked one.” 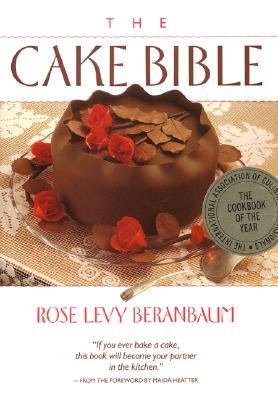 That author is Rose Levy Beranbaum. She penned two of my favorite, most frequently consulted cookbooks: The Cake Bible, and Rose’s Christmas Cookies.

Her first best seller, The Cake Bible, was published in 1988. Offering unusual combinations of ingredients (such as chocolate chiffon cake made with walnut oil), the recipes are detailed and meticulous. The book’s highly organized layout would meet the exacting standards of any librarian. According to the New York Times review titled “A Cake Wizard Brings Out a Book of Magic,” “Another long-term goal of Mrs. Beranbaum’s was to make cakes and desserts less sweet, trying to lower the amount of sugar without ruining the recipe.” Don’t think this collection is for dieters, though. Ms. Beranbaum says, “You don’t have a dessert to improve your blood chemistry.” She knows her baking chemistry. At New York University she spent seven years at night school, studying food science and culinary arts, and earned a B.S. and M.A. What she achieves in The Cake Bible is an ideal balance of art and science, resulting in cakes both delicious, beautiful, and foolproof.

While preparing this post, I discovered Ms. Beranbaum’s blog. Her post, “Why ‘Real’ Baking”, explains why baking from scratch is preferable to using a mix, and includes reassuring tips for beginning bakers.

The blog’s content is serious, the tone lighthearted: “i’m jewish, i write bibles, and i still don’t use kosher salt in baking!” In her 2006 holiday message, regarding a fellow baker who was planning the world’s largest chocolate menorah for Hanukah, Ms. Beranbaum wrote:

The spirit of this gift touches my heart because it follows a very beautiful tradition of embracing other people’s spiritual beliefs. Did you know that the most powerful Jewish liturgical music, the Kol Nidre, was written by the musician and Protestant minister Max Bruch as a gift to the Jewish community in England? I wrote my book “Rose’s Christmas Cookies,” in this same spirit and was rewarded by it becoming a classic, still beloved by many after 15 years. My editor, at first, doubted the wisdom of my writing it, but admitted later that she had been mistaken. And what was one of the truly most gratifying moments of my professional life was when a reviewer in Rhode Island wrote that the introduction contained the most moving prose on Christmas ever to be written. I still get the chills even as I write this.

As I bake for friends and family, I’ll hide a tin of cookies in the freezer, and look forward to letting one thaw while I steep a mid-winter pot of tea.