Nothing rockets a book faster to the top of my TBR list than the news that it’s been banned or challenged by somebody somewhere. That’s how I found myself burning through Courtney Summers’s YA novel Some Girls Are, which was recently removed from a South Carolina honors English summer reading list at the request of a parent who found it objectionable. The school’s principal pulled the book from the list without subjecting it to the normal review process, which is exceptionally disturbing since Some Girls Are was just one of three books the students could choose from (ironically, Summers’s book was replaced with Laurie Halse Anderson’s Speak, another YA novel that frequently turns up on banned and challenged lists for its frank discussion of uncomfortable topics).

Some Girls Are tells the story of a popular girl’s fall from grace and subsequent bullying at the hands of her former friends. Regina is one of the Fearsome Fivesome, the clique that rules her small town’s high school. But staying in a clique can be just as hard as getting into a clique, as Regina discovers after her BFF’s boyfriend tries to rape her one night at a party. When the friend she confides in proves untrustworthy, Regina finds her reputation smashed to pieces and her membership in the Fivesome revoked…possibly for life.

“An Abstract Exploration of Bullying,” student artwork from Beyond the Book. Click through to learn more.

One thing this book does exceptionally well is examine the relationship between being bullied and bullying, examining how a person can shift back and forth from one state to the other. It’s not an easy read: not content to explore one teenage challenge, Summers throws the entire kitchen sink of adolescent problems at her characters at once, including eating disorders and the death of a parent. Every child in this novel is a hot mess, and their teachers and parents are pretty much either oblivious to what’s going on with their kids, or deliberately turning a blind eye.

I could see where that might make a grownup reader feel uncomfortable.

Summers mounts an eloquent defense of the book on Tumblr that, I think, gets to the heart of the matter:

I have made a career out of writing young adult fiction about difficult topics. It’s my deepest hope teenagers living the harsh realities I write about–because they do live them–will read my books and feel less alone. It’s incredibly powerful to see yourself in a book when you’re struggling. Not only that, but gritty, realistic YA novels offer a safe space for teen readers to process what is happening in the world around them, even if they never directly experience what they’re reading about. This, in turn, creates a space for teens and the adults in their lives to discuss these topics. Fiction also helps us to consider lives outside of our own, which in turn makes us more empathetic toward others.

Including Some Girls Are on a summer reading list for students entering West Ashley High School could have been an opportunity to send a message about the types of shaming, language, and bullying that would not be tolerated as well as increase students’ awareness of the effects this type of behavior has and open up critical lines of communication about it.

Summers understands intuitively that the most offensive thing a teenager can experience in a classroom is silence.

Some books are hot potatoes nobody wants to touch. Some books push us out of our comfort zones. Some books remind you that some things never change, and never will change unless they’re brought out into the sunlight. Some books are the only means by which a teenager in trouble can reach out for a lifeline. Some books might be the only opportunity some children will have to develop compassion for others who are less fortunate. And every book is one somebody’s “some books are” list. Read them before somebody decides you shouldn’t be allowed to.

Truth-telling time: were you bullied in school, or were you a bully? Both? Neither? Do you think bullying has gotten worse in the digital age, or does it just seem that way because it’s more widely reported? What would you want your high school classmates to know about you now?

If you are a teen being bullied, or in an otherwise violent or abusive situation, the Teen Services staff has put together a resource guide with information to help you cope. Parents who would like to talk about bullying with their kids and teens can consult the information available through the National Bullying Prevention Center. The American Academy of Child and Educational Psychiatry also maintains a resource page for parents and clinical professionals who work with bullies and their victims.

The Colors of Challenge

I wondered if there was a correlation between books with diverse content — that is, books by and about people of color, LGBT people, and/or disabled people — and book challenges, so I decided to take a look at the data available from the ALA’s Office of Intellectual Freedom and see what emerged.

After looking at a variety of data points (including several lists from the American Library Association‘s Office for Intellectual Freedom) and creating a number of revealing pie charts, Lo came to the following conclusion:

It’s clear to me that books that fall outside the white, straight, abled mainstream are challenged more often than books that do not destabilize the status quo. This isn’t surprising, but the extent to which diverse books are represented on these lists — as a majority — is quite disheartening. Diversity is slim throughout all genres of books and across all age groups — except when it comes to book challenges. 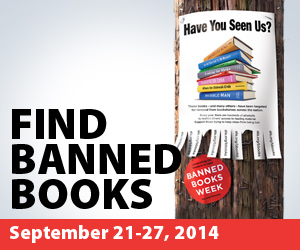 I strongly urge you to read Lo’s entire analysis (you really need to see those pie charts) and examine her data-crunching, which she has made publicly available here and here. Once you’re done with that, I invite you to celebrate Banned Books Week this year by checking out any of the titles Lo analyzed, or the following suggestions, which are taken from the ALA’s list of Most Frequently Challenged Books Written by Authors of Color, 1990-1999:

Kaffir Boy, Mark Mathabane. Protests. Boycotts. Fear. Hunger. A true tale of life under apartheid in South Africa, told by a man who suffered through it first-hand, eventually escaping to became a well-known tennis player. Most often challenged for homosexuality and explicit sexuality in general.

Roll of Thunder, Hear My Cry, Mildred D. Taylor. Taylor’s Newbery medal-winning novel tells the story of Cassie Logan and her family, who are struggling to hold on to the land they own in Mississippi, despite the challenges of the Great Depression. Most often challenged for offensive language. Also available in OverDrive.

The House of the Spirits, Isabel Allende. Meet the Trueba family, three proud, passionate generations of them. The Truebas are known for two things: the psychic giftedness that seems to run in their bloodline, and their political involvement, which frequently puts them at odds with fellow family members. A long, sweeping saga that is most often challenged for being sexually explicit, and containing offensive language.

Always Running, Luis Rodriguez. By the time he was twelve, Rodriguez was already a battle-scarred veteran of L.A.’s gang wars. The power of words led him to complete his education, become a poet, and leave his former life behind him…at least, that is, until his own son joins a gang. A New York Times notable book, and winner of the Carl Sandburg Literary Award, Always Running  is most often challenged for being sexually explicit and containing offensive language.

If you’d prefer to keep to this year’s theme, banned and challenged comics, you can explore diverse works like Alison Bechdel’s  Fun Home, Marjane Satrapi’s Persepolis, or Kim Dong Hwa’s The Color of Earth. But what I’d really like you to do is go back and read (or re-read) Malinda Lo’s essay, and then tell two friends, who will hopefully tell two friends, and so on, and so on. It’s a whole new (albeit appalling) way of thinking about book bans and challenges, and it will be interesting to see if there is an even stronger correlation over time (though we librarians will do our best to ensure that doesn’t happen).

Keep your reading diverse and colorful!