Explore the Unknown with Your Library Card

Since I was a kid I have looked to the library to indulge my curiosity for things that, well, let’s just say I might not want to ask about too loudly in polite company. The relative anonymity of the library’s nonfiction classification system is much better for exploring interests that you might be a little embarrassed about; you may be reading about continental philosophy, you might be reading about astrology, but unless somebody gets really nebby and takes a close look no one will ever know which one it really is.

The library in Richland Township was the first public place that I remember my mom allowing my older brother and me to be in without supervision. In those pre-Internet days, there wasn’t much trouble that a kid could get into in a small, suburban library in the time it took her to go to the Shop’ n’ Save, so during the summer we’d get dropped off for an hour or so. After a few visits, probably once I exhausted the library’s collection of Peanuts books, I decided to venture into the nonfiction section, and it was there that I somehow managed to stumble upon this: 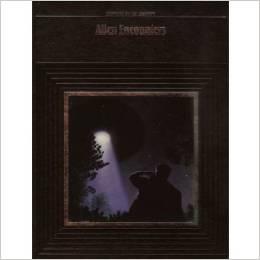 For the uninitiated, this is Alien Encounters, part of the Mysteries of the Unknown series of books put out by Time-Life in the late ’80s and early ’90s. (Our collection of these is sparse because librarians, following good collection maintenance practices, have correctly weeded most of the copies from the collection.) These books are an encyclopedic reference to all kinds of paranormal activities, from alien abductions to psychic events to alchemy to straight up magic, supported by very clinical looking illustrations of aliens and monsters, and backed up by the kind of “Coincidence? Or…ALIENS?!” logic that has recently been taken to its logical extreme by the History Channel’s Ancient Aliens show. To a ten-year-old kid, finding these books on the shelf at the library in the company of history books, science books, and how-to books (and with embossed pleather covers no less) was like getting an official confirmation from the land of adults that those things that go bump in the night are in fact real, and are probably looking in your bedroom window every night. It was a rush! And although that building was demolished to make way for the lovely Northern Tier Library years ago, I can totally remember right where those books were on the shelf.

Of course, I never really believed in any of that stuff, and as I entered in to adolescence, I had plenty of other avenues of curiosity that I wanted to explore in the pages of books. (I can also remember exactly where on the magazine rack where you could find around that time the racy-by-early-90’s standards Rolling Stone with Janet Jackson on the cover.) And as my reading habits have evolved, and my to-read list has grown long enough that I probably won’t finish everything that I know I want to read in my lifetime, my reading about aliens, ghosts, Bigfoot, and anything else that may have appeared on an episode of the X Files has really dwindled down to none.

It had dwindled, that is, until a little over a year ago when the Library added digital magazines to our eCLP collection. Before Zinio launched publicly, staff had a chance to familiarize ourselves with the new collection. I quickly found some old favorites — Runner’s World, New York Review of Books, Bon Appetit, Saveur, Esquire — and while I was very excited about having digital access to these, I soon found that, like those Peanuts books when I was a kid, they soon felt a little stale. As I browsed the holdings, like young me wandering the nonfiction stacks, I stopped short when I came across this:

Suffice to say, I don’t make many paranormal discoveries these day, and this gave me a little taste of that excitement of reading “serious” writing about something that, while I really don’t believe in it (really!!), gives me a little thrill. In the spirit of sharing that discovery with you, I won’t go into detail about this. Let’s leave it at this — if the Weekly World News is like the New York Daily News of the world of the strange and paranormal publications, the Fortean Times is like the New Yorker for that world.

To read this awesome magazine, or any of the other hundreds of great, if less fantastical, magazines available through Zinio with your library card. But don’t blame me if you can’t sleep tonight!

-Dan, who, unlike Fox Mulder, believes that the truth is nowhere near as “out there” as he’d like it to be.

Things Could be Much, Much Worse

Worried about the swine flu? Read some of these novels about horrific plagues to remind yourself that things could be much, much worse!

I Am Legend by Richard Matheson – The classic novel about a plague that causes vampirism. Apocalypse ensues.

World War Z by Max Brooks – There’s nothing more terrifying than a zombie plague, unless you’re able to come up with a clever new way to write about it, as Max Brooks has done. 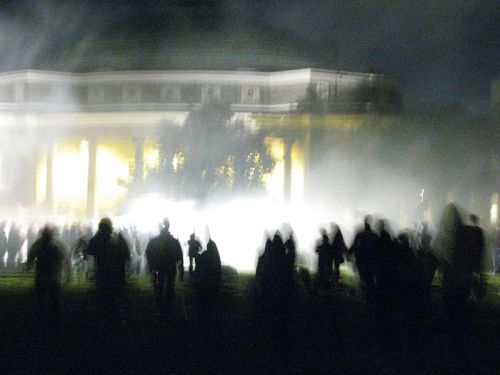 Some plagues are scarier than others...

Infected: A Novel by Scott Sigler – Here’s a book that proves that plagues invented by aliens can be just as scary as plagues spread by the marauding undead.

The Stand by Stephen King – A timely tale about a deadly flu that leads to an end times battle royale between good and evil.