You wouldn’t know the truth if it kicked you in the head. – Hitch

I sometimes wonder if the First Amendment should be conditional, though I’m not sure what the criteria or who the arbiter would be.  It can’t be based on education; too many supposedly educated people are horse’s patooties. It goes without saying that it cannot be left up to government at any level or to any party. So, even though I empathize with the Hamiltonians rather than the Jeffersonians, I’ll defer to Jefferson on this one.

Where did this originate from to throw my otherwise good nature off (the time is truly ripe for a baseball piece, isn’t it?) I’m sure many of you have online affinity or discussion groups you participate in or observe.  If you’re a Facebook user, you’re used to seeing someone’s snippet of an idea that may or may not convey a profound level of intellectual thought.  At any rate my friends (real and FB imaginary) and I float in that direction rather than posting inane pictures of our cats, dogs and other drooling pets. One of the things I try to do is to mix-up the choir a little bit. Where’s the fun in engaging in discourse if everyone has the same worldview? Ragging on the opposition in a unanimous voice has to get boring, doesn’t it? However, every so often something happens, or someone writes / posts something that leaves you honestly concluding “the zombie apocalypse would be a breath of fresh air.” (I was actually much harsher in an expletive laden sort of way.)  Here’s what was posted: 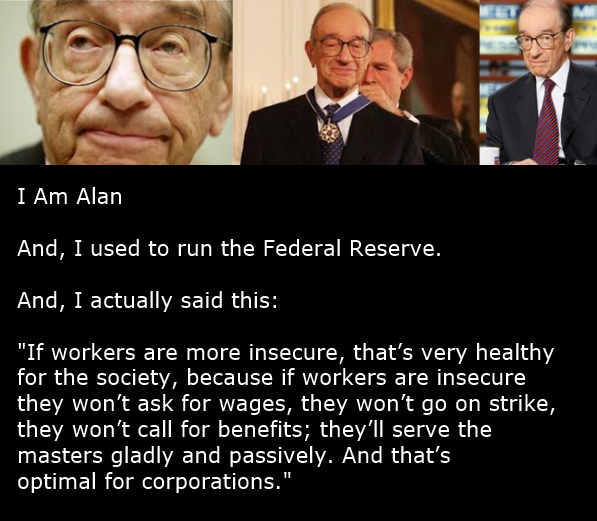 Saw this and a succession of commentary and my sense of what’s right & wrong went into skeptical overdrive.  Needless to say, using rather common Librarian superpowers (readily available to mere mortals, but don’t tell anyone,) I satisfied myself and some other well intentioned folk that former Fed chief Greenspan never said this, and never endorsed this kind of economic view in any forum.

What Alan Greenspan did do, in testimony before the Senate Committee on Banking, Housing, and Urban Affairs in 1997, was outline several of the reasons why inflation was still low to non-existent in the previous 3-4 year period.  Among the reasons he cited and the evidence provided were a recent history of longer union contracts, fewer labor-management conflicts and fewer workers moving between jobs.  He also concluded that the then current phenomena of worker insecurity needed to be further studied to find fully accurate causes.  I will say, he did it in florid and terribly dry fashion –

“The reluctance of workers to leave their jobs to seek other employment as the labor market tightened has provided further evidence of such concern, as has the tendency toward longer labor union contracts. For many decades, contracts rarely exceeded three years. Today, one can point to five- and six-year contracts–contracts that are commonly characterized by an emphasis on job security and that involve only modest wage increases. The low level of work stoppages of recent years also attests to concern about job security.”

The link above takes you to the catalog record for our holdings (on fiche) of the hearings that Chairman Greenspan appeared before, but you can also go one additional step to prove a point (and pass on the fiche.)

We did this once before around here, only the subject was then Vice Presidential candidate Sarah Palin, and the accusation was that as Mayor of Wasilla, she had actively pursued the censoring of materials from the Wasilla Library.  A little legwork by library staff debunked that story too.  I am a firm believer in letting the honest facts speak for themselves, and letting people prove they aren’t worthy of my time or consideration by dint of their real sins, not the imagined ones.