I Absolutely Didn’t Hate The Haters

After my soapbox-declaring love for Jesse Andrews’ debut novel Me and Earl and the Dying Girl, let’s just say I was eagerly awaiting his followup, The Haters.

Best friends Wes and Corey love hating on everything, even the stuff they love. When we find them at the novel’s beginning at a super-competitive jazz camp filled with really intense campers they start hating on it immediately. But, as the great philosopher Swift once said, “haters gonna hate” and Wes and Corey find a likeminded hater in Ash, seemingly the only girl at camp. After bonding over their mutual hateship, the trio ditch camp, form their own band and go on tour, which turns out exactly like you’d expect a tour planned by pre-college teenagers to turn out.

Me and Earl and the Dying Girl was a fairly mature young adult novel, what with (spoiler alert) one of the title characters (spoiler alert) dying from (spoiler alert) cancer, but with The Haters Andrews has doubled-down on the young adult experience, including all the ridiculosity and awkwardness that comes with it. Not to give too much away, it’s a much less sad book, but no less realistic. From Corey defying his parents for the first time to Wes’ first time having sex—in a scene that so closely resembles my own first time that I’m half-convinced Andrews was hiding in my closet—The Haters will undoubtedly have something in it to which you can relate, and it rewarded my eager anticipation in spades.

Similar to Wes and Corey, I was in jazz and concert band in high school, but I didn’t hate on it. As my classmates listened to the whispers of the Ying Yang Twins, Kelly Clarkson‘s complain about her career in optometry and the Black Eyed Peas sing about camels, I was plugged into my portable CD player (remember those?) listening for countermelodies, harmonies and other musical flourishes on the first CD I ever bought—the Jurassic Park soundtrack. Yes, I was that band geek.

Maybe it’s cliché to describe writing like this as “real,” but I can think of no better term. Andrews imbues his characters with a penchant for self-deprecation and I absolutely love that, mostly because I’m the mayor of self-deprecating humor. If you ever see me on the street, ask me to tell you about my one pickup line that involves me carrying a microscope around a bar. My friends get a kick out of it. Anyway, when Andrews uses this humor it adds a natural level of realism to his writing and it makes the characters feel like friends I haven’t met yet. I thoroughly enjoyed the time I spent in the world of The Haters and couldn’t stop myself from reading, even though I dreaded what I’d do with my life when I finished. I considered being an alpaca farmer a few times.

“When I leave, alpaca this book.”
Source

While Andrews obviously excels at capturing teen angst and awkwardness, I’d love to see him branch out to more adult novels. I’m not asking for Fifty Shades of Grey written by Jesse Andrews (but now that I’ve typed those words I want nothing more), but I’m eager to see him tackle a different genre. For example, Matthew Quick maintains his style in both adult and young adult books, and although I’ve never read anything by James Patterson, I’m pretty sure he’s written books for every reading audience. He even wrote a book for zoo animals.

Wes, Corey and Ash might not be the most likeable characters in the beginning, but that could be the point. Do you remember what you were like as a teenager? Besides a lot more acne, you probably weren’t the pleasant bouquet of posies you are today. You most likely changed, as does our trio. Likewise, your opinion of them may change. No matter what flaws readers may perceive in The Haters, I’ll definitely be in line for whatever Andrews writes next. He wrote the screenplay for the movie version of Me and Earl and the Dying Girl—which I also loved—so maybe an film adaption of The Haters is right around the corner … 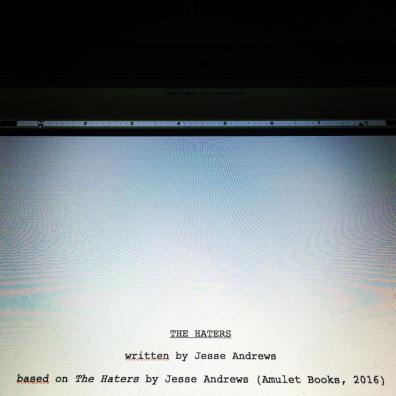 Part Scott Pilgrim with shades of a Monty Python sketch plus a lot of heart,  you’ll be hard-pressed to find a reason to hate on The Haters.