One day I was about to go to lunch and realized I had nothing to read. The horror! I scanned the shelves at my branch and settled on a book whose cover had always fascinated me, but I’d never gotten around to reading. Also, kicking around in the back of my head was that it was being adapted into a movie by Tim Burton. But we’ll get to that later … The book was Miss Peregrine’s Home for Peculiar Children by Ransom Riggs. 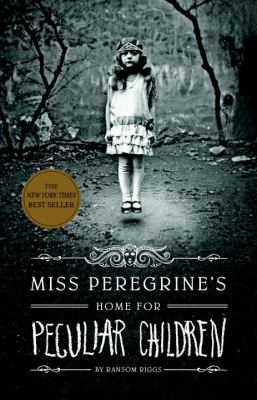 Here’s why you shouldn’t judge a book by its cover. For whatever reason, I always thought Miss Peregrine would be about circus sideshow performers, not unlike Geek Love. I literally have no idea why I thought that, but I went into the book with that mindset. Turns out I wasn’t that far off. Miss Peregrine follows Jacob, our sixteen-year-old narrator. After his grandfather dies, Jacob travels to an isolated island off the coast of Wales. There he finds the rundown ruins of Miss Peregrine’s Home for Peculiar Children, a mythic place often mentioned in the stories from his grandfather’s salad days. Despite the school’s decrepit remains, Jacob soon learns that the unusual children from his grandfather’s stories may still be alive—and may still be children.

The book takes its time, but I was engrossed by the mystery. It does end somewhat abruptly, though, as it is the first in a series. If you don’t feel like committing to two more books of Peculiars, I’d sit this one out. Despite its shortcomings, what really makes Miss Peregrine stand out is the weird vintage photography interspersed between the pages. If you liked that aspect (or vintage photography in general), I’d advise you to check out a book of found photography that Riggs edited called Talking Pictures: Images and Messages Rescued from the Past. At times sad, at other times hilarious, it gives you a feeling of nostalgia even if it’s for a time you weren’t alive for.

Normally if I read a book I like, I’ll order the audiobook version for my mother, but for this one I really felt that the photography added something to the book that couldn’t be conveyed in audio form. She usually likes what I recommend, the only exception being Me and Earl and the Dying Girl. That disparity caused such an argument that I’ve had to eat my sandwiches with the crust ever since. We’ll see how she likes this one.

As for Burton’s adaptation (I told you we’d get to it), when I began reading Miss Peregrine, I couldn’t picture it as a Burton film. I’m a fan, but the presence of (sort of) time travel and stories of Nazis made me think of a Steven Spielberg or Robert Zemeckis movie. It wasn’t until I was well over one hundred pages in that I could see the Burtonesque potential.

Fans of Xavier’s School for Gifted Youngsters Miss Peregrine’s Home for Peculiar Children will notice some pretty obvious changes right away, but I’m optimistic. I’m probably more bummed that Burton’s frequent collaborator Danny Elfman isn’t scoring the film than I am about any disparities between the book and movie. The gruesome tentacle-mouthed Hollowgast and Samuel L. Jackson as a dead-eyed Wight both look particularly promising. And the titular children look like they walked off the pages of Burton’s The Melancholy Death of Oyster Boy & Other Stories.  It appears that Burton turned Miss Peregrine into a concise standalone film more in the vein of Edward Scissorhands and Big Fish than Alice in Wonderland or Dark Shadows. In other words, a good Tim Burton film.

Have you read the books? Are you stoked for the movie? Let us know in the comments below!