Carnegie Library of Pittsburgh and Eleventh Stack are celebrating Black History Month by highlighting books, music and movies by African American Artists. We also have a ton of great events and programs for children, teens and adults. You can view all of our Black History Month posts here.

More than 10 years after Hurricane Katrina devastated New Orleans and surrounding areas, it’s no wonder that we’re seeing the physical destruction,  human suffering and resulting complicated emotions reflected back to us through fictional lenses. Here’s a look at a few of the many post-Katrina titles worth your time.

A panel from Dark Rain by Mat Johnson

In this graphic novel, Dark Rain is not only an allusion to physical presence of the hurricane, but it’s also the name of a shady private security firm policing the citizens of New Orleans while simultaneously trying to capitalize on the mayhem. In a story where all the characters are trying to get a piece of the action, one character in particular has to decide what he’s willing to risk and what he’s trying to gain. 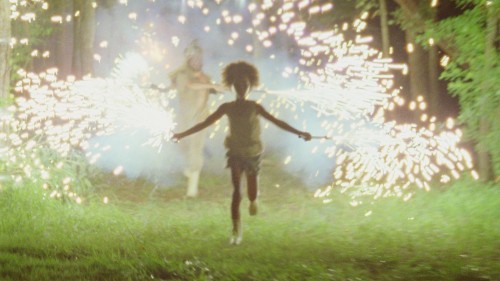 Quvenzhane Wallis in Beasts of the Southern Wild

Beasts of the Southern Wild

Ok, so this movie isn’t technically about hurricane Katrina, but it’s pretty hard to deny that Katrina helped to shape and influence the film.  With elements of magical realism, the plot centers on a young girl, her father and their surrounding bayou community dealing with a major flood and its aftermath. One of the lead actors, Dwight Henry, has said that living through Hurricane Katrina directly impacted his performance: “I was in Hurricane Katrina in neck-high water. I have an inside understanding for what this movie is about. I brought a passion to the part that an outside actor who had never seen a storm or been in a flood or faced losing everything could have.” With absolutely stellar performances by the two stars, (both novice actors), gorgeous cinematography and evocative storytelling, this one isn’t to be missed.

Fourteen year old Esch is pregnant, one of her brothers is attempting to keep pit bull pups alive, her dad is a hard-living alcoholic trying and failing to take care of it all, and, oh yeah, a massive hurricane is on it’s way.  You can feel the looming hurricane in the air as the book builds to its crescendo, yet we never forget that the hurricane isn’t the only, or even the biggest, obstacle these characters face. Life will go on, somehow. Ward brings this family and their struggle to life with poetry and humanity that you won’t soon forget.