The Newport, RI Most Beautiful Pageant as depicted on “Another Period.” (Courtesy of Comedy Central.)

As a fan of comedy, I’ve really been enjoying the new Comedy Central show Another Period. The premise is fun and silly – the show centers on the rich, debauched and aristocratic Bellacourt family, who live in an opulent mansion in Newport, Rhode Island during the Gilded Age. It’s a little Downton Abbey and a little Keeping Up With the Kardashians with a touch of Upstairs Downstairs.

One of my favorite things about the show is that in spite of its silliness, many of the crazier plot threads are based on actual events. It inspired me to check out a documentary on the history of the mansions of Newport Rhode Island – many of which were incredibly decadent and built to compete with the mansions of their (also filthy rich) neighbors.

One event on the show really got me curious about its historical inspirations though. In the fourth episode, the Bellacourt family hosts the first Newport’s Most Beautiful Pageant – which pits women against babies and cabbages.

I had to wonder, was there actually a precedent for this sort of thing? Were there truly beauty contests back in the day where bathing beauties would compete alongside vegetables? 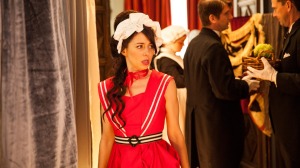 Lillian Bellacourt prepares herself for the swimsuit competition. (Courtesy of: onionav.club.) 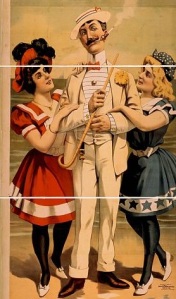 An advertisement from 1898 depicts the swimsuit fashions of the time. (Courtesy of: loc.gov.)

The short answer is pretty much, and the man responsible is none other than P.T. Barnum. According to this Library of Congress page:

P.T. Barnum staged the first modern American pageant in 1854, but his beauty contest was closed down by public protest. He kept the contest going by substituting daguerreotypes for women, a practice quickly adopted by newspapers. Newspapers held photo beauty contests for many decades: in 1880, the first “Bathing Beauty Pageant” took place as part of a summer festival to promote business in Rehoboth Beach, Del.

The first beauty contest took place at Barnum’s American Museum, which you can learn all about on The Lost Museum website. According to the site, “the Museum was the first institution to combine sensational entertainment and gaudy display with instruction and moral uplift. For a twenty-five cent admission, visitors viewed an ever-revolving series of “attractions,” from the patchwork Fejee Mermaid to the diminutive and articulate Tom Thumb. 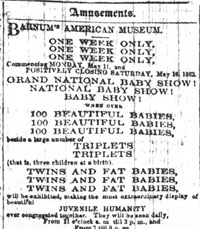 Triplets! Twins! Fat Babies! An advertisement from 1863 for the National Baby Show. (Courtesy of The Lost Museum.)

Some of Barnum’s most popular attractions were “national contests” where dogs, chickens, flowers, and even children (and women!) were displayed and judged for paying audiences. The poultry and baby contests were especially popular, although there were some critics who called for others to protest the baby shows, hilariously seeing them as an, “unseemly public display of private maternal virtue.”

A polka composed for Barnum’s National Poultry Show. (Courtesy of The Lost Museum.)

A polka composed for Barnum’s National Baby Show. (Courtesy of The Lost Museum.)

So, while I was not able to find any specific mention of cabbages, it appears that ladies were indeed being judged alongside babies, chickens, and nonsentient objects – but at least they weren’t competing against each other!

PS – In case you’re still not sure if the show Another Period is for you, I present you with this dog in a wig — enjoy!