Part of HC Gilje’s “The World Revolves Around You” at the Wood Street Gallery.

A City Without Guns, by Jennifer Nagle Myers, part of the Unloaded exhibit at Space.

This past Friday, the Pittsburgh Cultural Trust hosted their quarterly gallery crawl in the cultural district downtown. The library had a buttons-and-fliers booth there, as we do at a lot of downtown events. I just went as a citizen; I love these. I wasn’t always an art fan, but I met a few local artists when I first moved to Pittsburgh, and discovered that these events were a great introduction to the community.

The gallery crawl is a relatively simple event: multiple venues open, often with special exhibits or live performances, and the public is invited to visit and witness art. The downtown Pittsburgh events sprawl throughout about ten square blocks, at twenty to thirty separate venues. Some venues, usually the ones that are actually galleries, showcase traditional art (i.e. art you can hang on a wall or put on a literal pedestal). Others show films, offer dance lessons or yoga classes, present improv comedy, host artist talks, demo cooking techniques, etc. A night market allows local artisans and small businesses to display wares for purchase, and is generally accompanied by food booths from local restaurants. If you missed this one, the next one will be happening July 10. 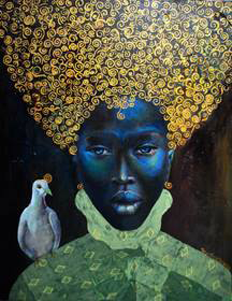 From Tamara Natalie Madden’s exhibit “Out of Many, One People” at 709 Penn Gallery.

This kind of event is one of the things I love about Pittsburgh. I went to this event as part of a foursome, hoping to see one artist and one musical group that I recognize from previous events around town.  I encountered a handful of unexpected familiar faces, including a few of you I know from the library. I got into conversations about love and pain and funk music and ephemera and and and….

A lot of the artists are new enough or working on a small enough scale that the library doesn’t yet have them in our collection. And let me tell you, we are missing out. Some were beautiful, some were perplexing, and some just felt like they reached in and grabbed the heart out of your chest. To learn more about some of the themes and events, try these from our catalog:

The Early Mays self-titled second album, songs from which were performed during the “crawl after dark.”

A collection from a National Poetry Month podcast, an event coming to an end in just a few days that was being celebrated at a downtown public school.

Several books in honor of National Jazz Appreciation month, which has been associated with performances downtown throughout April.

To learn more about cool things to see and do around Pittsburgh, look at these:

Finally, to get more art in your own life, try borrowing materials from the Braddock Library’s Art Lending Collection.