Another Part of the Foerster 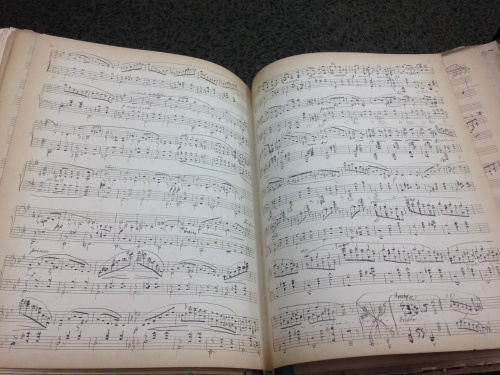 I recently had the pleasure of doing some preservation work on this beautiful volume of handwritten manuscripts of songs by Adolph M. Foerster. The pages are filled with musical notation set down in fountain pen, some with corrections added later in pencil. It is beautiful calligraphy. 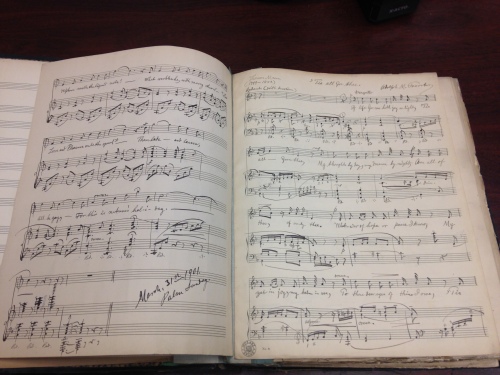 Works dated from the late 19th and early 20th Century

Adolph Martin Foerster (1854 – 1927), an internationally known composer, music teacher, music historian, and conductor, was born and resided most of his life in Pittsburgh. He taught privately at the Pittsburgh Female College. He became the conductor of the Symphonic Society in 1879, and was elected conductor of the Musical Union in 1882. After 1883 he devoted himself to teaching, composition, and writing articles about the music history of Pittsburgh, fellow musicians in Pittsburgh, and other topics. His articles were featured in The Musical Forecast and other national periodicals.

Foerster materials in The William R. Oliver Special Collections Room include 6 scrapbooks, a photograph album, 2 volumes of his manuscripts, and 5 volumes of his published compositions. The library has other examples of Foerster’s published works, some available for circulation.

One scrapbook of particular interest to me is Scrapbook Volume 5, which contain a series of articles from The Pittsburg Dispatch. Written in August and September of 1900 by Mrs. Henry B. Birch, they are titled “Musical Pittsburgh in the Olden Days,” “Growth and History of Music in Pittsburgh,” and “History of the Work of Pittsburgh Musicians.”

Ah, articles written 115 years ago about music in the olden days of Pittsburgh. Bliss.

More photos of the manuscripts: 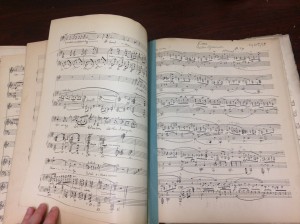