Today’s post is a guest essay from Megan, a children’s library assistant at the East Liberty branch. You can learn more about her, and the other Eleventh Stack contributors, on the About Us page. Enjoy!

It’s never too late to pick up a good book, but now is a perfect time to read Ready Player One by Ernest Cline, if you haven’t already. Naturally, you can get it from the library.

If you grew up in the 80s, love video games, pop culture, Dungeons and Dragons, or just enjoy unique stories full of awesome puzzles and clues, you’ll probably devour this book. I know I did.

The story is set in a bleak future where most people’s only escape is a virtual reality universe called the OASIS. It brings together the world wide web, games, shopping and entertainment. Thousands of places from movies, games and TV are re-created and ready to explore. Many people even work or attend school in the virtual world.

When James Halliday, the ridiculously wealthy creator of the OASIS, dies, he leaves his fortune to whoever can find an “Easter egg” he hid somewhere in the online universe. Of course a lot of people want to find it, including a corporation that hopes to take over the OASIS and commercialize it, charging a fee for access.

The story is told by a dedicated “egg hunter” named Wade, who lives in his aunt’s trailer with 14 other people. The money would change his life, but it’s just as important to him that the OASIS not fall into the hands of a company that would monetize it, cutting off millions who can’t afford to pay.

Finding the egg will require not only cleverness, but a deep knowledge of 80s culture and games. Halliday was a teen in the 80s, and he made it clear that sharing his obsessions is the only way to win. Wade spends all of his free time studying these subjects. We readers can enjoy the book without that level of dedication, but the more references you get, the more fun it is. 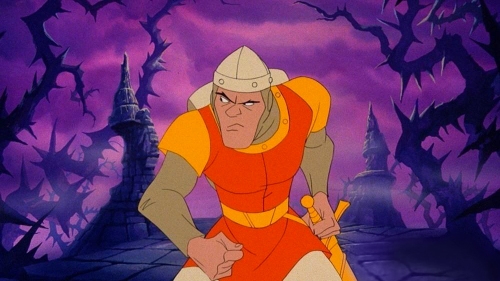 It’s kind of like that. Photo taken from The Dragon’s Lair Project – click through to visit site.

Read it before the movie gets made. Before the sequel comes out. Bonus points if you read it before Cline’s next book, Armada, is released this summer.

What can you do to maximize your enjoyment? I don’t want to spoil anything, but you may want to brush up on your arcade and Atari games, 80s shows, movies and music. Thankfully, the library has you covered!

Or browse the catalog for the album, movie or show of your choice. We’ll hook you up. The rest is up to you. Are you ready?

Tell us in the comments if you’ve already read it, or report back once you do. We’d love to hear your opinion, but no spoilers please.

One response to “Arcade, Well-Played”