When it comes to non-fiction, I go through a lot of “Dude, I should really read that” but very minimal execution on said talking to myself. Aside from my Read More Mysteries! goal (see our Reading Resolutions group post coming at the end of the month…), I’m gonna try for a non-fiction book a month. Wish me luck, ’cause the topics I’m interested in usually come in 400-page tomes.

These three should take me through March: 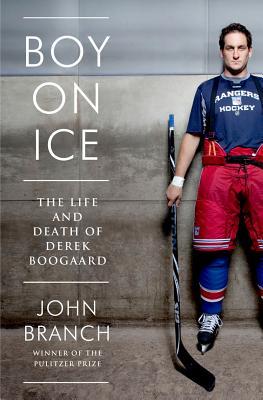 Derek Boogaard played hockey at the professional level for six years before his death in May of 2011. John Branch’s Boy on Ice explores his career, especially what it meant to have been an enforcer in the NHL, and how his posthumous diagnosis of chronic traumatic encephalopathy has changed the league in the seasons since.

My comic book interests run mainly toward the Dark Knight and his crew. Other than some passing trivia about the lasso of truth, I don’t know much about the Amazon warrior princess. I’m hoping to change that with The Secret History of Wonder Woman. Her creator, William Moulton Marston, was a psychologist whose research on emotion and blood pressure was a major contribution to the modern polygraph test — later the inspiration for that lasso of truth.

Five Came Back : A Story of Hollywood and the Second World War dives into how the wartime experiences of John Ford, George Stevens, John Huston, William Wyler, and Frank Capra affected their careers, and Hollywood as a whole. Huston and Stevens both served with the Army Signal Corps, a unit responsible for making documentary films. Ford and Wyler were with the Navy and Air Force, respectively, also creating documentary pieces. Capra entered the Army as an enlisted man and worked directly under Chief of Staff George C. Marshall to make the seven-part Why We Fight series of films.