The Communion of Reading: William Stafford

The poet William Stafford and my father were born in the same year, 1914, one hundred years ago. I’m having trouble reconciling that, for some reason.

As far as I can intuit, there is one thing that they shared: there was a depth of feeling, tinged with sorrow, that framed their lives. One found an outlet; the other did not.

In this one hundredth anniversary year of his birth, a wonderful new collection of William Stafford’s work has been assembled, Ask Me: 100 Essential Poems, compiled by his son, Kim Stafford. 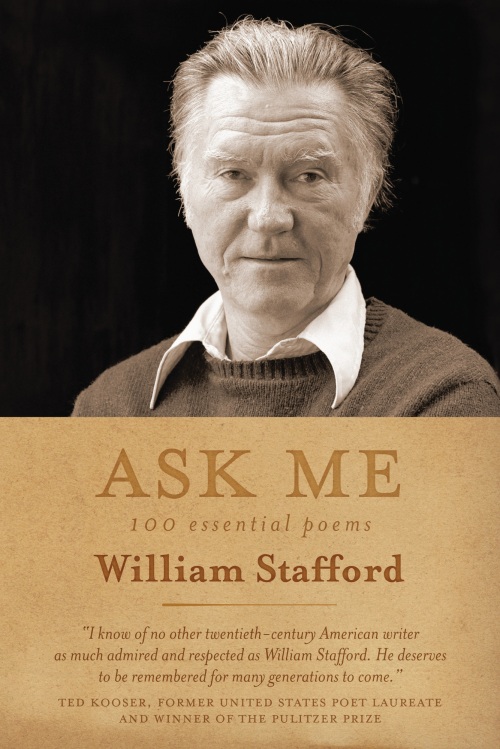 Perhaps the two most complex relationships in (human) life are between mothers and daughters and fathers and sons. Kim Stafford’s collection of his father’s work testifies to a depth of understanding and emotion in life, including the father/son relationship, that is rare, indeed, even amongst the finest of poets.

My father was an avid reader though, like most of us, not often of poetry. Still, one of the greatest gifts he ever gave me was a penchant for the works of Thomas Hardy. For an aging, exhausted shipping clerk to catalyze this kind of connection, classic author to father to son, was no mean feat. It was a way to express emotion, something far more difficult than even the grueling, mind numbing job which helped shorten his life.

Oddly enough, looking at what I’ve written so far, it is readily apparent that, during this National Poetry Month, this wonderful retrospective selection of William Stafford’s work has, in memory, given me back my father in a moving, important way.

That is what the communion of reading can do.

Here is a poem by William Stafford from Ask Me that speaks directly to the feelings I’ve been grappling with, in a manner I feel no prose account might do:

My father could hear a little animal step,
or a moth in the dark against the screen,
and every far sound called the listening out
into places where the rest of us have never been.

More spoke to him in the soft wild night
than came to our porch for us on the wind;
we would watch him look up and his face go keen
till the walls of the world flared, widened.

My father heard so much that we still stand
inviting the quiet by turning the face,
waiting for a time when something in the night
will touch us too from that far place.

PS:  Thanks,  David Mahler, for the gift of William Stafford.