“Air raid, Pearl Harbor. This is not a drill!” 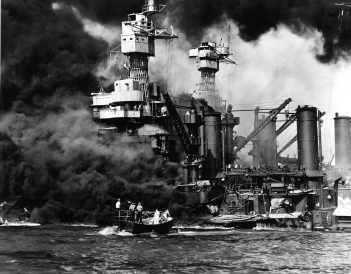 Tomorrow marks the 72nd anniversary of the Japanese attack on the United States naval base at Pearl Harbor, Territory of Hawaii. The next day President Roosevelt asked for, and received from congress a declaration of war against the Empire of Japan.  On December 11th, Nazi Germany declared war on the United States. America had become an official combatant in World War II.

As a military maneuver the Japanese attack was an almost perfectly executed assault of torpedo and bombing attacks on the anchored US Pacific Fleet, in concert with bombing and strafing attacks on nearby Army and Marine airfields, barracks, and related facilities.  American efforts at guessing Japanese intentions and assuming a competent defensive posture were ineffective, and in the case of the Army Air Corps. counterproductive.  Thinking that local sabotage was a greater threat than an “enemy” attack, instead of being dispersed, aircraft were lined up wingtip to wingtip so they could be guarded more effectively.  It also made them sitting ducks.  Not everything went the Japanese way. Their desired primary targets, the aircraft carriers Enterprise, Lexington, and Saratoga weren’t in port, and the Japanese didn’t damage the submarine fleet or the 4.5 million barrels of bunker oil on hand, needed to keep the fleet at sea. Had the Japanese destroyed that reserve, what was left of the fleet might have had to relocate to the West Coast from Pearl, endangering both Hawaii and our lines of communication to Australia and New Zealand.

What did the Japanese accomplish?

More significantly, the Japanese united a nation split on whether the then two-year old war with the axis was “our” war or not. Between December 7th and December 8th, the America First movement and isolationist sentiment ceased to have a place at the table of public policy.  What the Japanese did was seen as treacherous and sneaky, without honor – because at the moment of the attack, they were supposedly negotiating in good faith in Washington.  Since they couldn’t decode and type fast enough, the Japanese emissaries – ignorant of the military plans in motion – failed to break off negotiations and deliver a declaration of war before the attack on Hawaii commenced.   Admiral Isoroku Yamamoto, planner and commander of the attack, a former Naval Attache to the US and Harvard student knew that offending the Americans sense of fair play was perhaps worse than the actual damage caused.  Said he:

“I fear all we have done is to awaken a sleeping giant and fill him with a terrible resolve.”

The story of Pearl Harbor has of course generated historical accounts, memoirs, assessments, literature, fictional accounts and movies.  Wherever your tastes and curiosities lie, it’s worth remembering that there are fewer than 3,000 Pearl Harbor survivors alive today, and the youngest would likely be 88 years old (assuming he lied about his age and was 16 in 1941.)

One of the first, and still one of the best historical overviews of the day (along the lines of Cornelius Ryan’s The Longest Day) written for the casual reader.  It’s well written and well researched (for the period it was written in,) though newer research has dated it somewhat.

Through extensive research and interviews with American and Japanese leaders, Gordon Prange has written what is widely regarded as the definitive assessment of the events surrounding the attack on pearl Harbor, and providing first-hand accounts and recollections from both viewpoints.

Historian Steven Gillon provides a vivid, revealing, minute-by-minute account of Roosevelt’s skillful leadership after Pearl Harbor; perhaps the most pivotal event of the twentieth century. Remaining steady and sure-minded, Roosevelt transformed a grave and potentially demoralizing attack into an occasion for national unity and patriotic fervor.

Gingrich and Forstchen provide a detailed account of the background and personalities leading up to the Japanese decision to attack the US.  Then they add the what-if scenarios that subtly change what happens as the Japanese follow their successful attack on the fleet with the additional waves to render the Pacific Fleet wholly ineffective, and Hawaii untenable as an anchorage.

On December 7, 1941, the Japanese attacked Pearl Harbor. In a well written of the type he excels at creating, Turtledove explores the logical “it could have happened scenario”, what if the Japanese followed up their air attack with an invasion and occupation of Hawaii?

From Here to Eternity / James Jones

It’s December, 1941 at Schofield Barracks, just north of Pearl Harbor. Private Robert E. Lee Prewitt is a bugler in the US Army. He’s transferred to an infantry unit whose commander is less interested in preparing for war than he is in boxing. But when Prewitt refuses to join the company team, the commander and his sergeant decide to make the bugler’s life hell.

Highly innovative grand and epic film that looks at the preparations for, and the attack itself through the eyes of both the Japanese and American participants, both high and low. From Admirals Yamamoto and Kimmel to Privates Lockard and Elliot (radar operators with no one to warn,) The inevitable unfolds.  Without a doubt the best feature film about Pearl Harbor. Featuring Martin Balsam,  E.G. Marshall, Jason Robards, Takahiro Tamura, James Whitmore, and Sô Yamamura.

A fantastic ensemble cast featuring some of Hollywood’s best actors as they’re starting out.  The film is faithful to the novel, capturing the rigidity, frustration and tempo of peacetime barracks’ routine and the seedy allure of Honolulu.  Featuring Ernest Borgnine, Montgomery Clift, Deborah Kerr, Burt Lancaster, Donna Reed and Frank Sinatra.

Great special effects minimally redeem a love story of brotherly sacrifice that plays footloose with history and made me cringe, though the misdated Battle of Britain scenes were great.  If you’re a connoisseur of long “B” movies, then maybe it’s worth your while.  Features Ben Affleck, Alec Baldwin, Kate Beckinsale, Jennifer Garner, Cuba Gooding Jr., Josh Hartnett, Jon Voight as Pres. Roosevelt.