Sky’s and Suzy’s recent posts about the seafaring life and pirates  inspired me to think about some historical romance novels that mix adventure, danger, and espionage with a romantic love story. In these novels, it isn’t all ballrooms, musicales, and country house parties, lovely as those things are.

Lord and Lady Smythe are out of work spies vying for one prime open position working undercover for the Crown. Their marriage has been foundering on lies for years, as identities are kept secret even from each other. Who will win the position? And can this marriage be saved? There soon will be others in this series, coming this fall.

Swept Away by a Kiss, Captured by a Rogue Lord, and In the Arms of the Marquess by Katharine Ashe

Ashe is a history professor and has a wonderful way of weaving history with romance. In her Rogues of the Sea series, three aristocrats, two who work undercover for the government and another a Robin Hood-type privateer, encounter love amid danger on the high seas. Ashe has another series, The Falcon Club, about another secret group, whose characters also appear in this series. 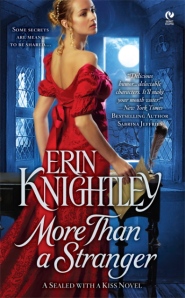 More Than a Stranger by Erin Knightley

Benedict and Evie have been faithful correspondents since childhood, until he abruptly stops writing and breaks Evie’s heart. Now he’s on the run for his life. Can he count on his childhood friends for support? And will they forgive his deceptions or use them against him? First in a series.

The Turncoat by Donna Thorland

This debut novel is classed as historical fiction instead of historical romance, but there is a beautiful love story that sizzles. Kate Grey is a dubious Quaker turned rebel spy who falls for British officer, Peter Tremayne. Can they trust each other while on opposite sides of a war? The first in a series set in pre-Revolutionary Philadelphia, with the second coming this November. 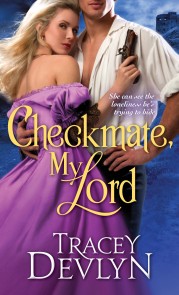 A Lady’s Revenge and Checkmate, My Lord by Tracey Devlyn

Nexus is a secret network of spies working against Napoleon Bonaparte. A Lady’s Revenge features the dangerous story of agents Guy and Cora while Checkmate, My Lord, is Nexus’ director, Somerton’s story. A bit arduous at times–the author describes her books as “historical romantic thrillers” with “a slightly more grievous journey toward the heroine’s happy ending”–the writing is so strong, I couldn’t put them down. The third book is due out this fall.

Note: This post is the second in a series highlighting historical romance novels I’ve greatly enjoyed.

4 responses to “Spies, Pirates, and Rogues”