Vengeance!  The word itself is charged with an illicit electricity. It is an ancient impetus from the murky depths of man’s primal past that simply won’t go away. Christianity couldn’t squash it and neither could secular notions about being nice to everyone because that’s the smartest thing to do. The idea of revenge is still with us and I imagine it always will be.

I wish I had enemies so that I could serve it to them. I would serve it cold, of course, according to a proverb from either the French or the Klingons, depending on which movie you are watching.  I have never really had grounds to pursue revenge. I think the worst thing that anyone has done to me was to steal my algebra notes right before the final at the end of my freshman year in high school. I failed the exam, but honestly I was going to fail anyway. Even if I had aced it, I was probably still going to fail the class. I made two good friends in summer school and the kid that stole the notes probably failed too. My notes were garbage. Unfortunately, I really don’t have any dire enemies. I wish I wasn’t so damned charming.

Despite the lack of first hand experience, revenge might be my favorite plotline. The ultimate revenge book, the great granddaddy of them all is, of course, The Count of Monte Cristo.

What can you say about The Count of Monte Cristo? The book has it all. An engaging cast of characters, a convoluted plot, plenty of action, and if you read the unabridged version, Turkish pirates! It might be the most famous adventure novel in the western canon. It is certainly very long. But fantasy pulp and sci-fi authors like George R. R. Martin and Robert Jordan have brought “long” back into vogue, doubtlessly propelled by customer demand. Dumas certainly offers a great deal of escape within Monte Cristo’s pages. The gripping plot is propelled by the true history of France, a factor granting real weight and urgency to the unfolding events.

The plot is so compelling and recognizable that many authors over the years have worked at homage. Here are only a few:

On my short list is Lawrence Watt-Evans Dragon Weather, a retelling set in a fantasy world. I don’t know what dragon weather is exactly, but I imagine Pittsburgh is due for some.

Lastly, Crux by Richard Aellen has a Vietnam war angle. 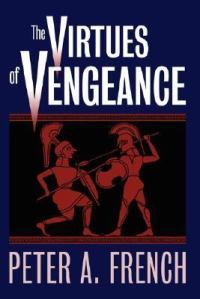 The Count of Monte Cristo has been adapted for the screen many times. You can’t go wrong with the 2002 version starring Guy Pearce and James Caviezel . Luis Guzman is a scene stealing Jacopo. It is a lavish period piece and a perfect Saturday afternoon sort of movie.

For the philosophically bent, there is this interesting book, The Virtues of Vengeance by Peter A. French. French makes arguments designed to bring the idea of vengeance into a positive moral framework.  The scope is large, beginning back with the ancient Greeks and ending with Clint Eastwood’s Unforgiven. I wasn’t totally convinced, but it is an interesting read. Either way, if you live or work near Professor French it’s probably a good idea to behave yourself.