WPA In Books and Movies 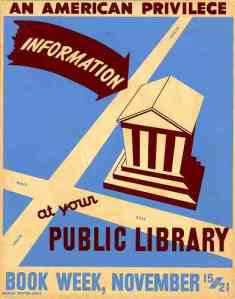 The history of the Works Progress Administration is a fascinating slice of the American experiment. For good and bad, better and worse, looking at this era is a fascinating glimpse at a specific moment in time. David Taylor’s book Soul of a People is a great look at the Writer’s Project of the WPA. Learning about how the WPA Guidebooks became a project of importance is both fascinating and worth knowing! Writing about every state and region of the USA, many now-well-known writers got their start in this project. His work is a great snapshot of the caliber of these writers involved in the WPA WP…including the likes of (but certainly not limited to) Zora Neal Hurston, Nelson Algren, Ralph Ellison and Louis L’Amour.

Susan Quinn delivers the goods on much of the drama in the WPA in her readable and gripping Furious Improvisation. This book touches on some really fascinating elements of the Project at the time, including the controversial play “Haiti.” There is also some noteworthy discussion of the visual arts including the mural works done at the time (think Diego Rivera). In addition, there is a solid discussion of the Federal Writer’s Project play called Cradle Will Rock.

A fantastic film adaptation of the goings on of this period are captured brilliantly in the 1999 film (by the same name noted above!) Cradle Will Rock, directed by Tim Robbins and starring Hank Azaria, Ruben Blades, John and Jane Cusack, Bill Murray and John Turturro. This movie is really entertaining, from the comedic tension between the bourgeoisie and the organizers and workers, to the serious social critique, back to the hilarious depiction of the stage production of the play at hand.

And, yes, dear Eleventh Stack blog reader, these are all available through your very own CLP. Check them out!