On Whistler and Peacocks

One of my favorite art stories is about James McNeil Whistler and his work on the Peacock Room.  An interior designer was working on a room in the house of Frederick Leyland when he consulted Whistler, who had a large painting hanging in the room.  Whistler gave his opinion that the red embellishments on the walls clashed somewhat with his painting, and offered to help retouch the walls with some yellow accents.  Jeckyll agreed to that and another minor change, left Whistler to it, and returned to his home in another city.

And then of course, Whistler suddenly realized that what the room really needed was a coating of gold leaf and some peacock decorations.  He was a bit vague with the owner of the house about his changes, telling him only how wonderful they were, and asking that he not return home until he was done working.  Then he had some parties and invited the press over to have a look. 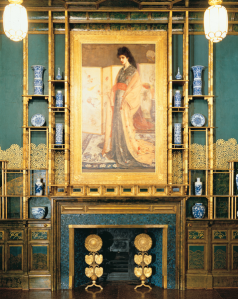 Whistler’s painting “The Princess from the Land of Porcelain,” hanging in the Peacock Room.
[Picture is in the public domain; click image for full source info.]

Gold leaf doesn’t come cheap, and when Leyland returned home he refused to pay for changes that he had never okayed.  Although he finally paid Whistler half the amount he had requested, Whistler went ahead and made a few more changes (some peacock blue accents and a couple of angry peacocks and more gold leaf, of course).

You can read the full story here, and if this has made you as big a fan of Whistler as I am, I’d urge you to check out the Peacock Room if you ever find yourself in Washington, DC with some time on your hands- it really is spectacular!  In the meantime, try one of these books to get your Whistler fix or check out the Whistler exhibit  next door at the Carnegie Museum of Art.