‘Cause This Is Thriller! 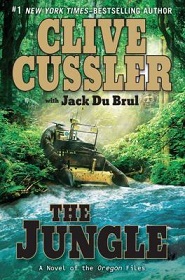 Well, not Michael Jackson’s Thriller, but rather, the thriller genre of books and movies.  The recent arrival of The Bourne Legacy movie got me in the mood to dip my toe back into the literary province of spies, ex-Special Forces warriors, and the thieves and terrorists they oppose.

See that cool book cover to the left?  I walked by that one for weeks before I finally gave in.  It was like walking by a plate of donuts. I finally had to grab one!  Ultimately, I ended up checking it out as an eBook for the ease of portability. Not having read any of the previous Oregon Files installments in this series did not deter me.  Cussler, and to a large extent co-writers Craig Dirgo and Jack Du Brul, make it easy to pick the series up midstream.  The Jungle reads like pretty standard stuff for the genre.  The Oregon floats about the world disguised as a rusty old cargo ship, but it’s really the mobile base for Juan Cabrillo and his soldiers of fortune.  Most of them ex-military, they take jobs from shadowy organizations like the CIA and wealthy individuals.  They clearly vet all of their jobs, careful only to take cases where their clients seem to be on the “right” side of things.
A bit simplistic, but the authors do not always render this world of counter-terrorism and “adventure archaeology” in pure shades of black and white.

Two other thrillers immediately come to mind when I think of this genre:

The Bourne Identity by Robert Ludlum — This stands as one of the most important books in the genre, and it spawned a series of books featuring the same character, along with the aforementioned movie franchise.

The Day Of The Jackal by Frederick Forsyth — Mr. Forsyth’s amazing sense of pacing lends this incredible story a gripping sense of reality that will keep you turning the pages until the last bullet has been fired. The 1973 film adaptation provides absolutely riveting viewing, and Edward Fox delivers a haunting performance as the enigmatic assassin out to slay Charles de Gaulle.

I’m by no means an expert, so if I’ve missed something obvious, sound off!