Vertigo Voted “Best Movie Ever Made” Over Citizen Kane? Not On My Watch…

Today’s post is the first–but hopefully not the last–op-ed piece from Mary.  Enjoy!

Maybe I’m not the best person to be blogging about the virtues of Citizen Kane over Vertigo. I’m not a “cinefile,” I call them “movies,” not “films,” and I don’t possess a black beret. When I’m having a bad day, I watch a Joan Crawford movie. Nobody, but nobody, suffers the slings and arrows of outrageous fortune better than old Joan. However, having just seen the latest list from Sight and Sound, where Vertigo is rated the best movie ever made, with Citizen Kane coming in second, I must speak.

For those unfamiliar with the prestigious publication, Sight and Sound is run by a group of British film critics so snooty that if you would even mention the name Will Ferrell in front of them, they would burst into flames. Every ten years they put out a list of the 50 greatest films ever made, and the list is taken very, very seriously by people who love movies. I mean film. Oh, whatever. This year, for the first time ever, Vertigo was placed above Citizen Kane as the best movie ever made. You could hear the black berets exploding off the heads and critics from Maine to San Francisco in shock.

So let me talk about Citizen Kane. I first saw an uncut version at the old Pittsburgh Playhouse back in the seventies. My chair was creaky, the film was scratchy, and I possessed an annoying husband at the time who kept threatening to walk out if I didn’t tell him what Rosebud was. Not the best way to experience it. In the age of Betamax I saw it again, still a scratchy print with bad sound. Best movie ever? Meh.

I finally saw it on an HDTV with a pristine DVD, and, well, just paint me blue and call me baby: I finally got it. The awesome cinematography in crisp shades of black, white and gray. The incredible lighting. The brilliant acting and directing. A storyline so fresh it could’ve been made yesterday. Audiences in 1939 must have thought they were watching something made by Martians, it was so far from the conventional movies of that time. It’s a masterpiece, and will always be one, even when it’s viewed someday by robot people on the Planet HooHah in the twenty-fifth century. 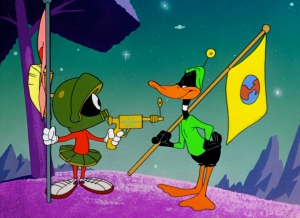 Or, perhaps, the 24th 1/2 century? Image courtesy of Wikipedia, with all rights reserved to Warner Bros.

And this is rated below Vertigo?  Vertigo is a second-rate Hitchcock. It stars Jimmy Stewart at his most whiny and unlikeable, and Kim Novak, who is about as animated as a cigar store Indian. Also, one scene features a giant Jimmy Stewart cartoon head that whirls around changing colors, a sight which never fails to make me snort popcorn out my nose. You want great Hitchcock? Rear Window, North by Northwest, or Shadow of a Doubt…and even they can’t top Citizen Kane. I hereby consign Vertigo to sit right alongside The Birds…and speaking of The Birds, that’s exactly what the Sight and Sound list is for.  Nyah-nyah to you, snooty British film critics. And guess what?  Anchorman II is coming out soon!  *BOOM!*

Now, if you’ll excuse me, I’m off to watch Joan Crawford suffer in Autumn Leaves while I consume vast quantities of Cheesy-Poofs. You go watch Citizen Kane. You’ll see what I mean.