Ah, family. They say you don’t get to choose your family, only your friends. But through thick and thin,  I know mine will always be there for me.

There’s plenty of fiction out there about the joys and sorrows of family but have you tried non-fiction?* These four books read even better than fiction and celebrate all the quirkiness, the closeness and alienation, the happiness and pain that is family, and they also tell a darn good story in the process.

Finding Annie Farrell: A Family Memoir by Beth Harpaz. Journalist Harpaz seeks to learn the history of her elusive and beautiful mother, Annie, an abandoned daughter of the Great Depression with aspirations of becoming a model and pilot in 1930s New York. She marries the author’s father, a war hero, and raises a family. But depression grips her and hangs heavy over their lives. Years after her death, Harpaz explores her mother’s past to try to understand a woman whose depression lifted only during vacations in Maine. 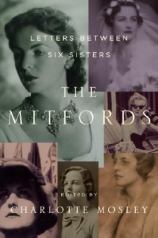 This hefty (824 pages!) but dishy tome is filled with only a fraction of the over 12,000 letters the colorful English sisters (Diana, Unity, Pamela, Deborah, Nancy, and Jessica) wrote to one another over their lifetimes. The daughters of Baron Redesdale, they were acquainted with major figures of the day: Adolf Hitler, Winston Churchill, Evelyn Waugh, John F. Kennedy, and Maya Angelou to name but a few. Despite their differences, they loved each other fiercely. Poignant, titillating, and scandalous, their letters are a fascinating compendium of twentieth century world history.

Like Family: Growing Up in Other People’s Houses by Paula McLain. Accalaimed writer McLain (The Paris Wife and A Ticket to Ride), grew up as a foster child shuffled from house to house to live among strangers with her two older sisters in 1970s California. Her stoic resilience in a life of fear, confusion, and sadness shines through in this memoir. What a beautiful writer!

Twenty Days with Julian and Little Bunny by Papa by Nathaniel Hawthorne. In the summer of 1851, writer

Nathaniel Hawthorne’s wife, Sophia, left for a family visit, leaving Hawthorne in charge of their young son, Julian. This charming diary is a chronicle of their days together, enjoying nature, playing, and dealing with the demands and responsibilities of caregiving (not to mention the constant chatter of a little one!) without a woman around the house. Sweet.

*This is the ninth post in a series of historical non-fiction books I’ve enjoyed.

One response to “Family Affair”