In California last week a friend taught me a hobo song. The tune flew back to Pittsburgh with me and followed me to work at the library. I still wake in the night with the melody teasing my sleepy brain. “Hobo’s Lullaby” is a beautiful song.

“Hobo’s Lullaby” was written by Goebel Reeves (born 1899). Teen-aged Reeves adored vaudeville and hobos. He traded a middle-class life for the adventure of roaming the U.S., singing, yodeling, and recording under pseudonyms, including “The Texas Drifter.” He wrote and performed autobiographical songs, and limited his chances for a lucrative career by refusing to settle in one place for more than a few months—a dedicated hobo.

Other musicians who hoboed are Woody Guthrie, Pete Seeger, and Utah Philips. Writers who hoboed include James Michener, George Orwell, Jack Kerouac (fictionalized in The Dharma Bums), and Jack London. 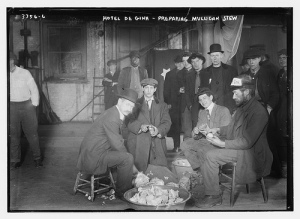 In its depression-era heyday, hobodom implied an itinerant lifestyle, usually lived by riding the rails (no ticket required).

Hobo, tramp, and drifter, often used interchangeably, are slang terms, lacking definitive etymologies. However, hobos defined themselves like this—hobos worked, tramps worked only when made to, bums did not work at all.

Jack London wrote in The Road (1907) of his adventures riding the rails.

It began to look as if I should be compelled to go to the very poor for my
food. The very poor constitute the last sure recourse of the hungry tramp.
The very poor can always be depended upon. They never turn away the
hungry. Time and again, all over the United States, have I been refused
food by the big house on the hill; and always have I received food from
the little shack down by the creek or marsh, with its broken windows
stuffed with rags and its tired-faced mother broken with labor. Oh, you
charity-mongers! Go to the poor and learn, for the poor alone are the
charitable. They neither give nor withhold from their excess. They have no
excess. They give, and they withhold never, from what they need for
themselves, and very often from what they cruelly need for themselves. A
bone to the dog is not charity. Charity is the bone shared with the dog
when you are just as hungry as the dog.

Also last week in California, I listened to “West London,” a song by Charles Ives, that musically illustrates and elevates a poem by Matthew Arnold.

Crouched on the pavement close by Belgrave Square,
A tramp I saw, ill, moody, and tongue-tied;
A babe was in her arms, and at her side
A girl; their clothes were rags, their feet were bare.

Some laboring men, whose work lay somewhere there,
Passed opposite; she touched her girl, who hied
Across, and begged, and came back satisfied.
The rich she had let pass with frozen stare.

Thought I: Above her state this spirit towers;
She will not ask of aliens, but of friends,
Of sharers in a common human fate.

She turns from that cold succor which attends
The unknown little from the unknowing great,
And points us to a better time than ours.