The first book for adults I ever read was the Holy Bible. I can remember its weight, the texture of the pebbled leather cover, the zipper on the side that sealed it up and kept the impossibly thin pages from damage as it was shuttled around in my book bag through elementary school. Unzipping the book at home was often exciting. The book filled my young imagination with images of an ancient, mythic past, complete with arid landscapes and exotic costumes. The book had it all, warriors and kings, prophets and pharaohs, bloody battles and fiery calamity. The language of the venerable King James edition, which celebrated its 400th anniversary just last year, was archaic, evocative and challenging. The Christian school I attended focused our attention on the New Testament. There I and my fellow students learned the gospels, Jesus’ life and teachings, Paul’s ministry and letters.

But I always thought all the good bits were in the first part. There was plenty of violence and warfare, razed cities, miracles and strange happenings, betrayal, and a great deal of begetting going on.

The Bible fixed itself permanently in my mind, an inevitability based on my background.  And I am certainly not alone. Everyone knows the big stories from the big book: Adam and Eve, the flood, the exodus, Samson and Delilah. The American lexicon is chock full of Biblical references. The blind leading the blind, washing your hands of something, reaping what you sow…

It’s no surprise then, that as I prowled the non-fiction stacks in search of material, my attention would eventually fix itself on studies and criticisms of the Holy Bible. CLP boasts a ton of titles on the topic, ably reflecting the recent demand for a bridge between the rarefied world of academia and the inquisitive consumer. Engaging the Bible with a critical eye, as one would with any text from the past, resided for the most part outside the public imagination–an activity for universities and seminaries. A couple of Dan Brown books and the discovery of a few gnostic gospels later, and now the demand for more information about the Bible is at a high point.

It had been a long, long time since I had cracked open the Bible so I humbly kicked off my reading with the Complete Idiot’s Guide to the Bible. With 66 separate books in a collected work that straddles two major religions, I felt like I needed a good refresher. 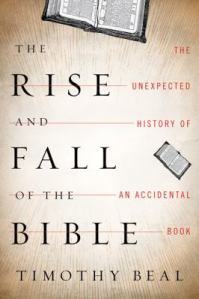 A neat book about the Bible as cultural icon is Timothy Beal’s The Rise and Fall of the Bible.  This easily digestible work is an interesting overview of the movement to make the Bible a ubiquitous item in the American landscape, its promotion and recent commercialization, and the aftermath of a century’s worth of scholarly examination. If you’ve ever wondered why there is a Bible in your hotel nightstand, then this is a great book for you. 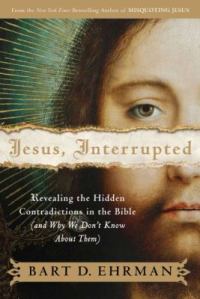 Jesus, Interrupted is a stormy work of inquiry into many of the thornier contradictions and potential problems in the text of the Bible. Scholar and former Evangelical Bart Ehrman has lit a firestorm of debate, judging by the amount of rebuttals revealed online by a simple Google search. Ehrman concentrates on the problems and difficulties of assembling the canon and the perils of hand copying–the method of replicating the scriptures in the long centuries between Jesus and the printing press. It’s a rollicking read with a great number of challenging points.  The book follows closely on the heels of Ehrman’s earlier work, Misquoting Jesus, which concentrates more heavily on untrustworthy scribes. 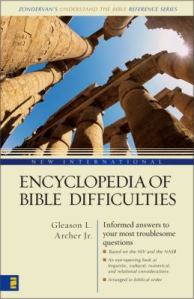 On the opposite end of the above works stands the New International Encyclopedia of Bible Difficulties by Gleason L. Archer Jr. This dense volume has an explanation for any possible oddity or discrepancy that one could find in the Bible. Those who cherish the idea of Biblical inerrancy will find this book indispensable. 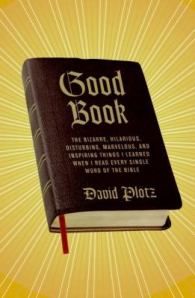 I can’t leave without mentioning this fun read, The Good Book: The Bizarre, Hilarious, Disturbing, Marvelous, and Inspiring Things I Learned When I Read Every Single Word of the Bible. David Plotz of Slate fame takes the reader on a sidesplitting journey through the entire Bible.

Works on the Bible occupy a fairly large area in the book stacks, so browsers are likely to strike gold. Up on the Mezzanine are many works on testaments Old and New, dozens of books on Jesus and early Christianity, women in the Bible, etc, etc…

But do be careful of studying too hard:

Ecclesiastes 12.12:  And further, by these, my son, be admonished: of making many books there is no end; and much study is a weariness of the flesh.