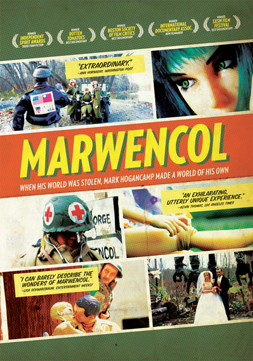 “Everything that is strong in me has gone into my art work.” – R. Crumb

I love Mark Hoggencamp, the subject of the recent documentary Marwencol. It won’t be giving too much away to say that in 2000, Hoggencamp slipped into a coma after being severely beaten by 5 men outside a bar in upstate New York. Upon waking up, he had sustained significant brain damage and had to relearn basic life skills. As a means of coping with what happened to him, he became obsessed with creating a miniature WWII Belgian village in his backyard called Marwencol, populated by an international cast of soldiers, with some Barbie dolls thrown in the mix for romantic possibilities.

Image from one of the many stories of Marwencol, from the website marwencol.com

The world he creates has its own mythos, and the documentary switches between the world of Marwencol and the real world of Mark Hoggencamp. In Marwencol people fall in love, and/or are kidnapped, tortured, saved. In one of my favorite story lines, the male soldiers are captured from the Hoggencamp Bar, and it’s up to the women of Marwencol to save them from the evil German Secret Service. Although the stories involving the world of Marwencol are engaging, it’s really Hoggencamp who’s the star of this documentary. In time, the film becomes less about the actual art Hoggencamp is creating, and more about the mysterious forces that have compelled him to become an artist and to create such an utterly fascinating and unique world in his own backyard. Through Hoggencamp’s art we experience how one invidual has chosen to process the experiences of his life—the good, the bad, the violent—in order to create a safe place in his world that feels like home.

Mysterious artistic forces are also present in the work of outsider artist Henry Darger. For folks unfamiliar with Darger, he was a reclusive custodian working in Chicago, Illinois. He became famous for his posthumously discovered 15,145-page, single-spaced fantasy manuscript called The Story of the Vivian Girls, in What is known as the Realms of the Unreal, of the Glandeco-Angelinnian War Storm, Caused by the Child Slave Rebellion, along with several hundred drawings and watercolor paintings illustrating the story. His unusual life and work are the subject of the 2004 documentary In the Realms of the Unreal, as well as the books Darger and Henry Darger: Art and Selected Writings. The poet John Ashbery also wrote an entire book length poem based on the work of Darger, entitled Girls on the Run.

We can never know the mysterious forces that compelled Darger to create the fantastic world of the Vivian Girls, or why Darger chose to deal with his childhood experiences through his obsessive and highly idiosyncratic art, rather than, say, taking up sports or drinking. 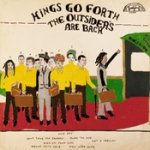 One of many faux album covers from Mingering Mike's website.

That kind of inscrutability is also found in the work of Mingering Mike, an imaginary recording artist. Dori Hadar and a few other record collectors were digging through flea market crates some years back, when they came across a huge stack of albums by an unknown recording artist by the name of Mingering Mike. However, when they pulled the “records” out of their sleeves, they discovered they were instead cardboard cutouts, grooves carefully drawn on with marker. An entire career was documented through faux album covers and track listings: “soundtracks to films that didn’t exist, instrumental albums, a benefit for sickle cell anemia, a tribute to Bruce Lee . . . songs protesting the Vietnam War,” a comeback album, and so on. These covers and more can now be glimpsed in the book Mingering Mike: The Amazing Career of an Imaginary Soul Superstar as well as on his website.

Another musical outsider (one who actually plays music) is artist Daniel Johnston, who sings what is possibly the most heartbreaking song I’ve ever heard about a cow. In The Devil and Daniel Johnston we’re witness to his childhood in West Virginia (he was always manically filming himself), quasi-fame in the Austin, Texas indie-rock scene of the mid-80s, a brief appearances on MTV, and eventual spiral into mental illness. Johnston is talented but mentally unstable, and the film questions the shaky line that exists between genius/creativity and mental anguish. The early, manic episodes in his 20s may have inspired some of his

best song writing, but may have at least partially led to his later heavily-medicated existence, living with his parents and playing shows on the rare occasions he feels up to it. And yet, for all his limitations, Johnston has lived an interesting life of fame and infamy—he’s friends with members of Sonic Youth, Kurt Cobain was one of his biggest fans, and his artwork regularly sells for thousands of dollars in the LA art world. There are certainly worse ways to make a living, crazy or no crazy.

Notorious comic artist Robert (R.) Crumb sports his own brand of crazy, but may actually be the most well-adjusted artist in this post. He’s highly successful, married to a fellow cartoonist, owns a country house in France, and appears to be a pretty loving dad to his daughter Sophie. And he’s definitely the most well-adjusted member of his immediate family. Fairly early in the documentary Crumb we are introduced to his two sibling brothers (mom is briefly viewed as well) and it becomes apparent that his childhood was less than rosy.

Crumb and his brothers drew mind-blowing comics as an escape from their chaotic childhood, but it was only R. who would turn his talents into a means of permanent escape, while his oldest brother remains at home with his mom and never leaves the house, and his youngest brother is holed up in a seedy residence hotel and spends his days sitting on a bed of nails (I kid you not.) Whether or not you’re a fan of Crumb’s work, this is an amazing documentary about an eccentric individual and the world of underground comics.

How about you, do you have a favorite (or least favorite) outsider artist?