In this information age, you might feel deluged with factoids, survey results, statistics, and countless other tidbits that you don’t know what to do with.  But in the following two books, four authors (and teams of assistants) have done massive amounts of research, a great deal of data mining, and a bunch of number crunching.  So you just get the fun part of reading their findings, speculations, and conclusions about two of the most fascinating subjects imaginable: sports and sex. 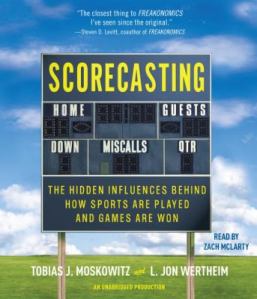 Scorecasting: the Hidden Influences Behind How Sports are Played and Games are Won

After reading this book, I think football teams waste too much money on first-round draft picks, I don’t think icing the kicker is so clever, and I have newfound respect for Bill Belichick’s strategy of often going for it on 4th down.  Rest assured, it also covers other sports: baseball, basketball, golf, etc.  My rational side loved seeing the mathematical undoing of the shibboleths of sports radio hosts and players and coaches at press conferences.  Finally, I can’t help mentioning the annoying cover blurb where the self-aggrandizing co-author of Freakonomics praises this book because it resembles Freakonomics.

A Billion Wicked Thoughts: What the World’s Largest Experiment Reveals About Human Desire

The subtitle is a little misleading because it’s not really an “experiment.”  Ogas and Gaddam tried to avoid the pitfall of most sexual behavior studies whose subjects typically are young, white, well-off, college students.  Instead, they mined immense amounts of data from Internet users’ searches, preferences, habits, interests, purchases, etc.  (Don’t worry, it was anonymous.)  They combined this with an impressive review of previous research as demonstrated by the enormous bibliography.  As with many other studies, the results both accentuated differences in men and women yet at the same time recognized the enormous spectrum of desire and sexual behavior for all people, whatever their gender, age, or orientation.  I would have liked to see more emphasis on cultural differences, though, because while the Internet is indeed worldwide, its user base still skews toward well-off, college educated people.

What are some of your billions of thoughts about books and studies that try to apply scientific rigor to human behavior and recreation?