Some Music from Syria 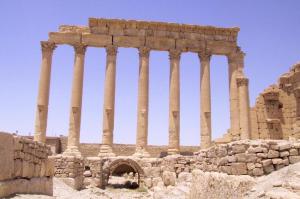 Syria is the latest in a growing succession of Middle Eastern or North African countries rumbling with civil unrest.  In Syria’s case, unfortunately, protests are being met with especially violent suppression.

In my dream world, whenever a country or culture pops up in the news, I want a mob of concerned American citizens to come to the library demanding books, journal articles, and documentary films about that particular place.  On top of that, I want that enthusiastic and friendly mob to also explore a country’s art, literature, films, and my specialty, music.

Syria is a country at a complex crossroads of ancient civilizations, major religions subdivided into sects, climates ranging from the Fertile Crescent to desert, and a population that ranges from nomadic camel breeders to sophisticated city dwellers.  So I simply offer you four CDs to start exploring Syria’s fascinating musical culture:

Enjoy your exploration of some of Syria’s music!  And thanks to those of you who also explored my suggestions of music from other countries in conflict: Afghanistan and Iraq.