When I first learned about the Battle of the Bulge – which began 66 years ago today – it was still fresh in my parent’s memories.  It was probably around 1964 which would have been the 20th anniversary of the German offensive into American lines in Belgium and Luxembourg.

For my mother it would have been another event prolonging the war and keeping her boyfriend (my father) overseas that much longer.

For my father, the concerns were more immediate; he was in the Signal Corps. attached to the 10th Armored Divison. On December 17th the 10th was ordered by General Patton to advance north from their positions along the Westwall (Siegfried Line) and attack the German’s southern flank and cutoff the German assault.  Virtually all of XX Corps. (my father’s parent command) stopped their advances, turned 90 degrees and attacked north – within a day.  Generals Patton and Walton Walker (commander of the XX Corps.) began planning and implementing the relief of the Bulge so that all General Omar Bradley had to do was say “go”.

For dad it was one of his two most frightening periods during two-plus years of overseas service.  Sometime after Christmas to the south-east of Bastogne he and his squad were taken prisoner by the Germans.  They had all been in combat long enough to know that there’s a fluid stage of battle where prisoners are an inconvenience and aren’t always accommodated.  There was an added concern, though not paramount, that being a Jewish GI wasn’t a good thing and he temporarily lost his ‘dog tags’ with their ‘H’ (for Hebrew) identifier.  My father and  several of the other captured Americans could speak German after a fashion and struck up conversations with their captors, pretty much conscripts like themselves, not Nazi ideologues. 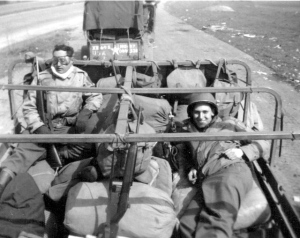 As the night wore on, these Germans realized that the continuing American counter-attack was going to cut them off from their forces, and they were going to be surrounded within a day.  They in turn surrendered to their captives and became POWs.  The war ended for dad in Czechoslovakia after being at the liberation of the Ohrdruf and Dachau Concentration camps.

For the record, the other frightening period he went through . . .  the possibility that after finishing in Europe, they would be sent to train and prepare for the invasion of Japan.