Setting: 15th century France. A new tapestry has been delivered to the castle. Woven of wool, silk, silver and gold threads, the labor of four weavers over one year, it cost the equivalent of the finest warship, or a wealthy nobleman’s entire year’s income. Queen Isabeau contemplates its placement.

Queen: Charlie is daft. A 14-by-18-foot tapestry? Hung on the west wall? Sure, the sea scene will reflect the moat. Nice touch. And it will cut down on drafts. But hanging it so close to the dampness of the moat? Hasn’t the King ever heard of reeky mildew? Yech! [steps back to gaze at tapestry] Nice ship, nice looking guys . . . 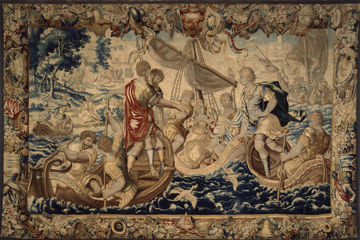 This is my little fiction. I’ve been reading big fiction (574 pages) to prepare for next month’s meeting of the Bound Together Book Club, the Library’s collaborative program with the Carnegie Museum of Art. On February 11, we’ll stare in wonder at the beautifully restored wall-sized tapestries in the Gods, Love, and War Exhibition, learn how they were made and what the imagery means. We’ll also discuss a relevant historical novel concerning Charles VI of France, In a Dark Wood Wandering by Hella S. Haasse.

In a Dark Wood Wandering follows strict parameters of the historical fiction genre: it presents a story that takes place during a notable period in history (beginning with the reign of Charles VI, known as the Wise, the Well-Loved, and the Mad King); the story centers on a significant event in that period (the second half of France’s Hundred Years’ War with England, which includes Joan of Arc’s military career); and the novel presents actual events from the point of view of people living in that time period (the majority of In a Dark Wood Wandering is from the point of view of Charles VI’s nephew, Charles, Duke of Orléans). To prepare for our discussion, I’ve been reading authoritative background history, none of which is nearly as compelling as this fictional account.

Please join us for Bound Together. Space is limited. Call 412.622.3288 to register. Gods, Love, and War: Tapestries and Prints from the Collection will be on view at the Carnegie Museum of Art until June 13, 2010.