A Funeral Mass for Landon

The weekend of December 4-6, the Pittsburgh Symphony performed an innovative and thunderously applauded version of Mozart’s Requiem conceived by Music Director Manfred Honeck.  Both local daily papers gave it positive reviews (here and here).  The concert was titled “A Funeral Mass for Mozart,” but with the recent death of noted Mozart (and Haydn) scholar H. C. Robbins Landon, I couldn’t help thinking of it also as a funeral mass for Landon.

As you may recall, H. C. Robbins Landon wrote the book 1791: Mozart’s Last Year that we discussed in our last Pittsburgh Symphony Book Club meeting, but much of his scholarship involved editing scores and reconstructing composers’ works.  Research such as Landon’s, while often trying to establish an authoritative version of a music score, often has the opposite effect of showing there is no definitive version of many works.

Mozart’s Requiem, unfinished at the time of the composer’s death and given to his pupils to complete from sketches, is a perfect example of this.  And since Landon describes how Mozart’s widow, Constanze, tirelessly promoted her late husband’s work including trying to get his Requiem performed every year, I think he and she would both be proud of Honeck’s envisioning of the piece. 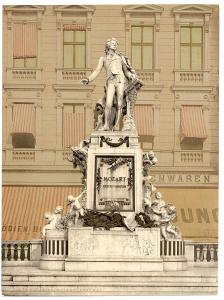