The Grapes of Wrath as an opera

It’s Halloween and some of you probably find opera to be scary. It’s really not. Also, the economy seems pretty scary right now. It really is. So two of your worst fears may be realized in John Steinbeck’s tale of Depression-era economic woe being turned into an opera. Conquer your fears! In November, go see it live at the Pittsburgh Opera! 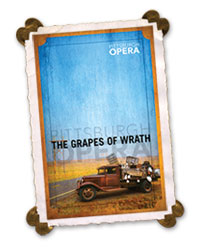 Making an opera out of the Grapes of Wrath is an ambitious task. It’s a long book with chapters alternating between the story of the Joad family and observations outside the narrative on such topics as jalopies, diners, the great migration to California on Highway 66, the vicissitudes of farm work, etc. The novel is also political with its rising resentment of the poor against land-owners, companies and banks. Finally, the dialogue is written in dialect.

So the librettist (the person who writes the text of an opera), Michael Korie, had his work cut out for him and he mostly does Steinbeck proud. I do question some of Korie’s departures from the book such as why the character Muley is made to accidentally shoot his son or why half-wit Noah’s decision to literally go “down the river” that’s so understated in the book turns into a overly dramatic suicide replete with Biblical references. But hey, such is the nature of the adaptation of any work. Korie keeps all the characters of the large Joad family and he keeps Steinbeck’s extra-narrative observations which are crucial to the impact of the book.

What about Ricky Ian Gordon’s music? It’s modern but not too thorny or dissonant; the comparisons with Aaron Copland and George Gershwin are appropriate and I might also throw in Benjamin Britten. And, without sounding hokey, it’s peppered with bits of Americana: banjos, whistling, fiddlin’, harmonica, swing, etc. The world premiere recording by the Minnesota Opera was released in August, but since then, enough revisions to the score have been made that the Pittsburgh performance is being called another premiere. This is somewhat fitting since Gordon is a Carnegie-Mellon University alumnus. (You can hear excerpts from the Minnesota recording at the Pittsburgh Opera website.)

Finally, if you have worries or curiosity about opera, the Pittsburgh Opera’s Opera Lady is happy to answer your questions. And at the library, we have a huge selection of almost 1500 opera CDs, over 400 on DVD, vocal/piano and full scores (i.e., bound sheet music), aria collections, and books to elicit and feed your new-found opera passion. Also, be sure to check out more music by Ricky Ian Gordon or Michael Korie’s lyrics for the musical version of Grey Gardens (another ambitious adaptation!).

One response to “The Grapes of Wrath as an opera”