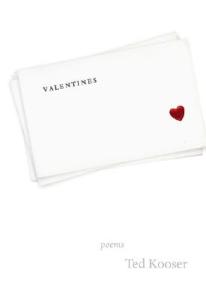 Someone I hadn’t connected with, until recently, was Ted Kooser. I’m not sure why; perhaps I had typecast him as a typical Midwestern poet, someone whose subjects and sensibilities are not things that normally show up on my radar. In some recent reviews, I read about his latest collection, Valentines, and was intrigued. So, when a copy came in for our International Poetry Collection in the Reference Services department on the second floor, I grabbed it.

As he explains in an author’s note, Kooser began sending out annual Valentine poems to a select group of 50 women in 1968, the poems being printed on standard postcards. 21 years later, his list had burgeoned to 2600 and, he implies, all the printing and postage was getting to be a bit much. So, the last card went out in 2007 and this book collects all the poems together, with one last one written especially for his wife.

The work in Valentines both celebrates and transcends the genre of occasional verse. The poems are, of course, all relatively short since they were originally published on postcards and I have a feeling that different poems here will appeal to different people. One short one that particularly struck me follows:

this Valentine’s Day, I intend to stand
for as long as I can on a kitchen stool
and hold back the hands of the clock,
so that wherever you are, you may walk
even more lightly in your loveliness;
so that the weak, mid-February sun
(whose chill I will feel from the face
of the clock) cannot in any way
lessen the lights in your hair, and the wind
(whose subtle insistence I will feel
in the minute hand) cannot tighten
the corners of your smiles. People
drearily walking the winter streets
will long remember this day:
how they glanced up to see you
there in a storefront window, glorious,
strolling along on the outside of time.

One of the appealing things about this poem for me is its echo of W. H. Auden’s poem “Funeral Blues,” popularized in recent times in the film Four Weddings and a Funeral. Kooser, however, transforms the conceit of stopping time from a devastating grief of loss to a celebration of love and immortality through verse, reminiscent of Shakespeare’s Sonnet 18 and Edmund Spenser’s Sonnet 75.

Kooser’s delightful volume of poems from the University of Nebraska Press is nicely illustrated by Robert Hanna; more poems from the book may be found in a pdf at the publisher’s website.

One final area of interest about Kooser, a former Poet Laureate of the U. S., is that he produces a weekly online poetry project entitled American Life in Poetry. This weekly web posting provides content for newspapers and online publications in the form of a column featuring contemporary American poems. Kooser selects the poems and typically provides a 3 to 5 sentence introduction to each. These columns are produced at no cost to any newspaper or online site that wishes to reprint them; all that is required is that the publication register on the website and that the text of the column be reproduced without alteration. Readers can sign up to have the column delivered weekly to their email box.

The stated intent of the project is “to create a vigorous presence for poetry in our culture” and, featuring work from poets as diverse as Sharon Olds, Ed Ochester, Wendell Berry, Jan Beatty, and 12 year old Max Mendelsohn, the project is certainly equal to the challenge. At 164 columns and counting, ALIP may just give Garrison Keillor’s The Writer’s Almanac a run for its money when it comes to presenting accessible poetry for all; some, no doubt, will welcome the competition, Keillor himself perhaps most of all. The work is all mercifully short, clear in language, grounded in subject, and forthright in execution.

Sort of like one person talking to another, really; come to think of it, that’s as fine a place to start when trying to describe what poetry is all about as most any I can think of.